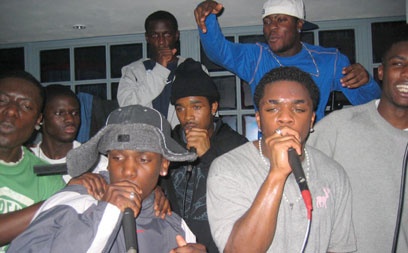 Dirty Canvas brings together the downtown gritty urban sounds of grime and dubstep to the uptown setting of the ICA. Following a successful year based at the Whitechapel Gallery, where the best of the grime/dubstep scene was showcased over the course of the last year, Dirty Canvas is moving onto bigger and better things, being re-launched as a monthly Saturday music night here at the ICA. The opening night will feature one of the grime scene's best kept secrets Ruff Sqwad, hailing (like Dizzee and Wiley) from grime's epicentre - Bow E3. If Ruff Sqwad had a US hiphop equivalent it would be Wu-Tang-Clan, with their fierce loyalty to the collective, their hugely distinctive and impressive productions and the range of vocal talent on offer. Although only still teenagers, Ruff Sqwad have been together for over 4 years and in that time have put together an impressive body of work, in particular the brilliantly received 'Guns and Roses' mixtape, the sequel to which will shortly be hitting the streets.

Ruff Sqwad will be joined by dubstep pioneer Plastician, who will be djing the scene biggest tunes, including many of his own productions. Plastician started DJing aged 16 and played on a number of London pirate stations before moving to his BBC 1xtra show. In 2004, he toured the USA with Aphex Twin's Rephlex label and featured on Rephlex's 'Grime' album.

Please note that the bar will be cleared from 6pm before this event.