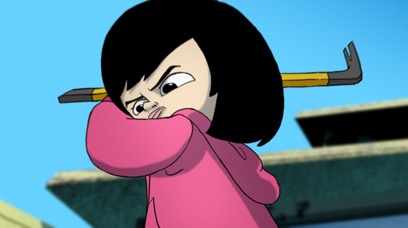 Adult-orientated animation about a former Christian minister who sets out on a violent mission to take his revenge on exploiters of his dead sister Christina, who worked as a porn-star named The Princess. The style is very Japanimation and also features live-action inserts in the form of deliberately dodgy-looking video. Clergyman August (voiced by Thure Lindhardt) arrives at a Danish brothel to take custody of his five-year old niece Mia after his sister's overdose. He realises young Mia has been abused, and demands that the porn company destroy everything featuring his sister. When they refuse he resorts to more gory methods of getting his own way, even encouraging Mia to take part in his bloody journey of revenge.