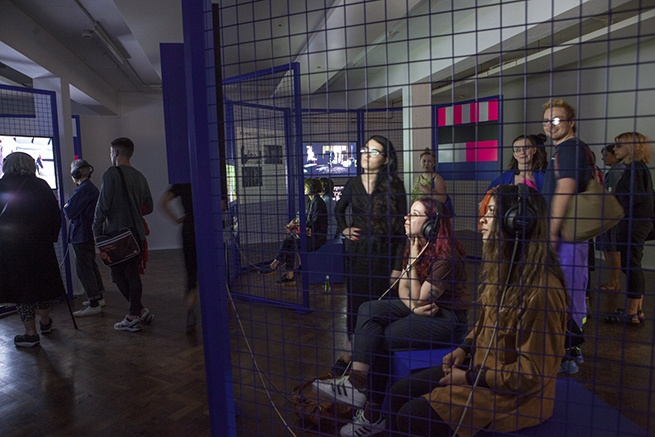 To celebrate the launch of EXPOSURE: A Guide to Exhibition, Distribution and Marketing for Filmmakers and Artists, produced by Random Acts North, this panel discusses how to get your work seen, from planning a festival strategy to understanding how artist films are distributed and exhibited in the UK and internationally.

Featuring a range of industry professionals including artists, curators and representatives from Sundance Ignite and the British Council, this talk equips you with a plan for extending the reach of your film.

Toby Brooks is the Manager of Sundance Institute's Sundance Ignite Program, which cultivates and supports a new generation of filmmakers. Brooks has worked for Sundance Institute for five years, first as the Assistant to the Director of the Sundance Film Festival. From 2012-2017, Brooks was a member of the Emerging Leaders Council at Outfest, a Los Angeles film non-profit that promotes LGBT equality by creating, sharing and protecting LGBT stories on the screen. A native of the San Francisco Bay Area, he received his BA from UCLA.

Alice Cabanas is Film Programme Manager for the British Council, running the shorts support offer and Travel Grant scheme alongside the international EU Film Festival offer.  Cabanas joined the British Council film team after three years with Encounters Festival, based in Bristol. She headed communications, strategy and development for the festival, beginning as marketing manager in 2014 and then leading the festival as co-director between 2015-17.

Aaron Dunleavy is a filmmaker from Blackburn, England and a recent graduate of University of the Arts London. His debut student short, Throw Me to the Dogs, won ten awards on the festival circuit, with praise from Academy Award-winning director Danny Boyle. Screening at some of the most prestigious BAFTA and Oscar-qualifying festivals around the world, the film went on to achieve worldwide distribution via MUBI, streaming in over 240 countries, as well as being awarded a 'Best of the Month' Staff Pick on Vimeo.

Dunleavy's films explore stories of working class youth, with unscripted and improvised performances, street casting and non-professional young actors at the core of his filmmaking approach.

James Mullighan is currently Producer of the CogX Festival - the most important AI event in Europe, which takes place at London's Tobacco Dock 11 and 12 June 2018. A film arts and festival consultant, he hosted the This Way Up Cinema Exhibition Innovation conference last November in Hull's Truck Theatre. Prior to that, he directed the 58th to 61st editions of the Cork Film Festival.

In 2012-13 he was Chief Executive Officer of Transmedia Next and, in 2011, directed the 65th Edinburgh International Film Festival. Before that he ran Shooting People and RESFEST's UK, Irish and Australian tours. Mullighan has been Contributing Editor for VODO, Cinovate and Rich Pickings, and was the Producer of Marketing and Distribution for the Sleep Paralysis Project. Mullighan serves on the Board of Encounters Short Film and Animation Festival, and is a trustee of Dramatic Need.

Yero Timi-Biu is an East London-based award-winning writer, director and producer. She has written and produced two films for Channel 4’s Random Acts, Beneath the Surface and Two Minutes. Alongside making her own content, Timi-Biu works on the commissioning team at BBC Films and has various long and short-form projects in development.

Harriet Warman has been working in film exhibition for over ten years. Part of the programme team at Edinburgh International Film Festival for five editions, Warman worked in various roles including short, feature and documentary programmer and programme coordinator. She produced two editions of Alchemy Film & Moving Image Festival in Hawick, Scottish Borders (2016 and 2017) and coordinated programmes at AV Festival in Newcastle and Berwick Film & Media Arts Festival in 2014.

As a freelance critic Warman has written for Sight & Sound, CineVue, KINO! and Glasgow's Physical Impossibility zine. Now based in the Scottish Borders, she is the creator of Behind the Curtain, a feminist film project that screens an eclectic programme of shorts and features, and advocates for the positive impacts of an engaged and representative cinema. Warman is also the Partnerships Coordinator at Regional Screen Scotland, the national agency responsible for developing access to screen experiences in remote and under-provided communities throughout Scotland.