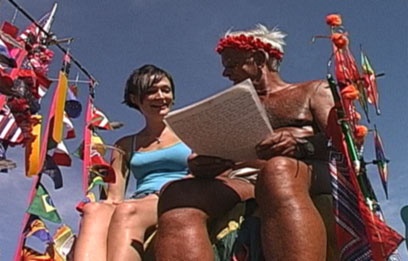 When actress Gwynne McElveen was 24 and living in County Meath with her 6 month old daughter, she started writing to Jim, an artist and prisoner living in Arizona. An unlikely friendship was struck between them which continues to this day, and which formed the basis for her debut documentary. 'Penumbra' follows her journey to America to meet Jim for the first time, and the story of her stateside experience is illustrated through his drawings.

McElveen approaches people she meets along the way and asks them to read extracts from the letters written over the five years of their correspondence. In this way we not only get to learn more about their friendship but we also get a feel for the strange places and characters she encounters. Speaking with his family and friends, she pursues a trail through Jim's childhood haunts and favourite hang-outs which finally leads to a meeting with the man himself.

As the film progresses the letters become less and less light-hearted, leading to the eventual revelation that Jim is on death row. Gradually and carefully we get to know this mysterious figure, whose recurring character, Captain Penumbra, inhabits the space between light and dark.