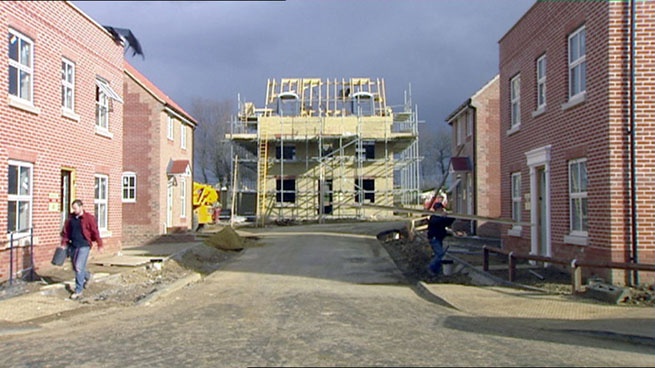 Perhaps space in a global economy is exemplified, not so much by the airport or the office tower, as by ... the dilapidated dwelling.

Patrick Keiller's film The Dilapidated Dwelling (78 mins, beta sx, 2000) is an examination of the predicament of domestic space in advanced economies, the UK in particular. A fictional researcher (with the voice of Tilda Swinton) returns from a 20-year absence in the Arctic to find that while the UK is still one of the world's wealthiest economies, its houses, flats etc. are typically old, small, dilapidated, architecturally impoverished, energy-inefficient and, especially, extraordinarily expensive. The film asks why repeated attempts to modernise house production have not been more successful. It includes archive footage of Buckminster Fuller, Constant, Archigram and Walter Segal, and interviews with Martin Pawley, Saskia Sassen, Doreen Massey, Cedric Price and others.

Patrick Keiller's films include the celebrated London (1994), Robinson in Space (1997), The Dilapidated Dwelling (2000), and Robinson in Ruins (2010); other works include the installations Londres, Bombay (Le Fresnoy, Tourcoing, 2006) and The Robinson Institute (Tate Britain, 2012), the latter accompanied by a book The Possibility of Life's Survival on the Planet. Formerly a research fellow at the Royal College of Art (2002-11), he has taught in schools of art and architecture since 1974.