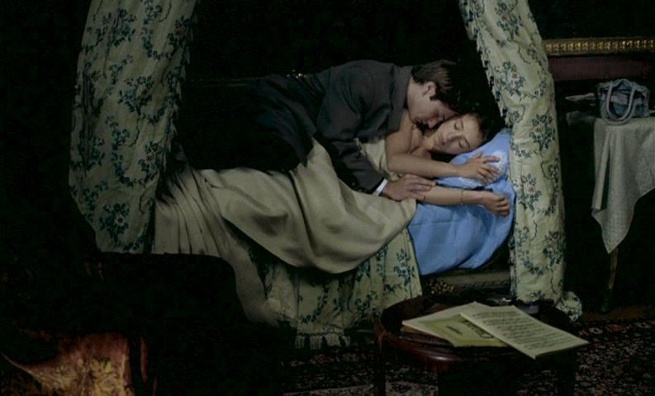 A woman’s high heels walking in Place Vendôme. The camera follows this elegant vision until they disappear into a car. A young man (Stanislas Mehrar) is following, keeping his eyes on the heels.

In Proust’s A la recherche du temps perdu, the young woman was Albertine, and the man Marcel. For La captive, Chantal Akerman, adapting La prisonnière, the fifth volume in the series, calls the woman Ariane (Sylvie Testud) and the man Simon.

Simon is housebound, Ariane happily not. But Simon forces himself to follow her outside, suspecting Ariane has girlfriends. His questions are relentless. Where has she been? Who with?

Proust offers one kind of enquiry into subjective agony - a decidedly male one. Akerman here builds a subjectivity for Ariane, who must negotiate the surveillance and microscopic scrutiny, at least as much as possible given her situation as object, or “woman as image, man as the bearer of the look” in Laura Mulvey’s famous formulation (Visual Pleasure and Narrative Cinema, 1975).

In one scene of sublime cinematic invention—on a par with the single shot of one women in profile and another in full face, but overlapping, in Bergman’s Persona—Akerman has her male protagonist on one side of a blurred glass partition in his bathroom, first in dialogue with the woman, then in outline as she speaks, an unstable figure that first leans one way and then the other in a vain attempt to merge with her body. Simon would love to inhabit or possess Ariane’s body, his agony is boundless.