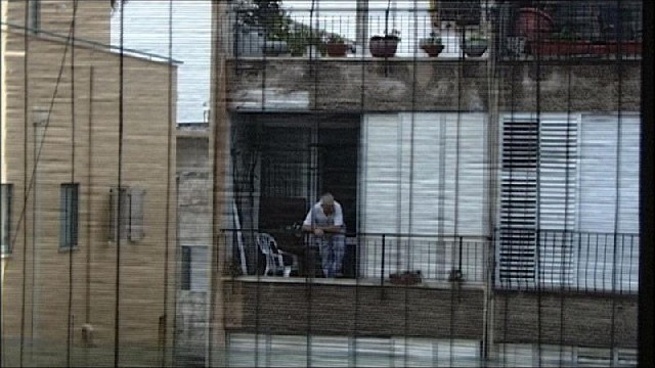 A Nos Amours: Chantal Akerman 24: Là-bas (Over There)

A camera in a room. A series of shots of a window, balcony, the light of the exterior world. Off screen we hear the voice of Akerman, on the phone. Has she been to the beach? No. She is indoors.

Akerman’s camera sees life beyond, glimpses of lives lived as in Hitchcock’s Rear Window. But the story told is very different: this is Tel Aviv, and Akerman is the daughter of Holocaust survivors. She is apprehensive about a recent bombing, and meditates on the whether Israel is indeed the ‘promised land’ or merely a new form of exile.

There are of course no conclusions to be drawn, because the debate is only ever at best provisional. "It’s complicated," she states. Her relationship with Israel is overwhelming and frustrating, a matter of love and hate.

And what of the sea? The vast untroubled waters have lapped these shores throughout human history. The sea is an image of freedom, or ease, of human concerns dwarfed. But as ever, it is back to the apartment, and the glimpse of a life outside, beyond the shutters.