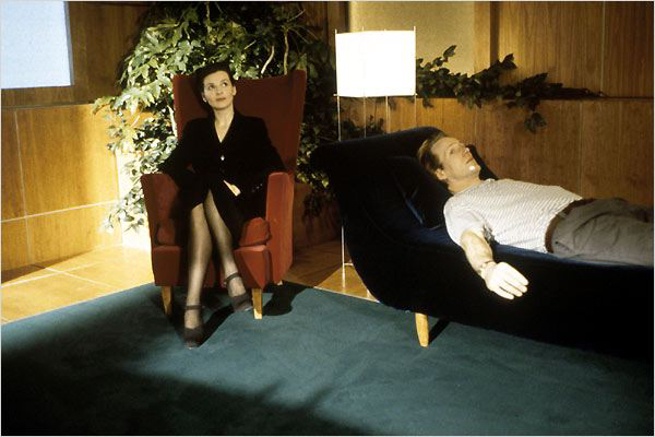 The plot reads like the outline of a film from long ago: a dour New York psychoanalyst Henry (William Hurt) decides to house swap his Fifth Avenue apartment for a place in Paris. He ends up in the bohemian home of a dancer named Béatrice (Juliette Binoche). She is insouciant as he is dour, and messy as he is tidy. Henry’s patients love Béatrice, and she finds she really can help them. Coming home, Henry finds his world in superb shape. Even his dog is happier. Henry has the wit to lie on her couch.

Akerman’s confection has a lightness that is hard to catch if in a hurry. Good to watch some Lubitsch to get in the mood. Then think of Peter Bogdanovich on Lubitsch’s style but could have been talking about Akerman:

“Something light, strangely indefinable, yet nonetheless tangible… one can feel this certain spirit; not only in the tactful and impeccably appropriate placement of the camera, the subtle economy of his plotting, the oblique dialogue which had a way of saying everything through indirection, but also - and particularly - in the performance of every single player, no matter how small the role."

This short film will also be shown at the screening. Akerman told Nicole Brenez in the Lola Pajama Interview in 2011 that it is, "at its heart, a homage to Godard". What could be better? After all, her first film, Saute ma ville, was indebted to Pierrot le fou.