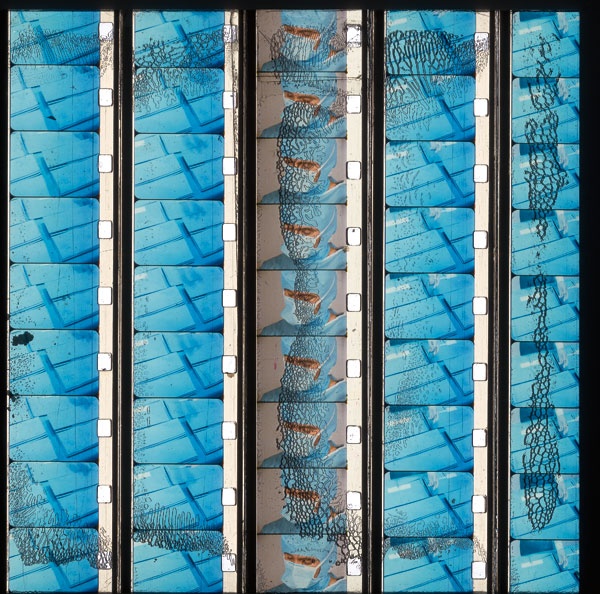 Known since the 1980s for his Super-8 films and performances, Luther Price has, in recent years, turned to 16mm, creating new works from discarded prints of old documentaries, instructional films, obscure Hollywood features, and other examples of cinematic detritus. Working in his home in the suburbs of Boston, Massachusetts, he re-edits the footage by hand, effaces the image through scraping, buries the films to rot and gather mold, and adds tumultuous visual patterns using coloured inks and permanent markers. For soundtracks, he frequently employs only the brutal electromechanical noise generated by sprocket holes running through the projector’s audio system, or abrades the optical track to introduce a sonic blur.
The manual ingenuity of his films produces equally complex emotional effects, suggesting chaotic mental states that lie just below the surface of consciousness. Each reel he creates is thereby a unique object, a kind of sculpture, often altered to such an extent that it seems to struggle through the projector, as if playing out the end of film itself. His is a cinema that ecstatically embraces its death drive, so as to achieve maximum potency.

Thomas Beard is a founder and director of Light Industry, a venue for film and electronic art in Brooklyn, New York. In addition to organising screenings and exhibitions for Artists Space, Gladstone Gallery, the Museum of Modern Art, the New Museum, and Tate Modern, he recently co-curated the cinema programme for Greater New York (2010) at MoMA PS1 and the film programme for the 2012 Whitney Biennial.

Ed Halter is a critic and curator living in Brooklyn, New York. He is a founder and director of Light Industry, a venue for film and electronic art, and has organised events at Artists Space, the Flaherty Film Seminar, the Museum of Modern Art, the New Museum, PARTICIPANT INC., and Tate Modern. He has also co-curated the film and video programmes for Greater New York (2010) at MoMA PS1 and the 2012 Whitney Biennial. His writing has appeared in Artforum, The Believer, Little Joe, frieze, Mousse, the Village Voice and elsewhere.