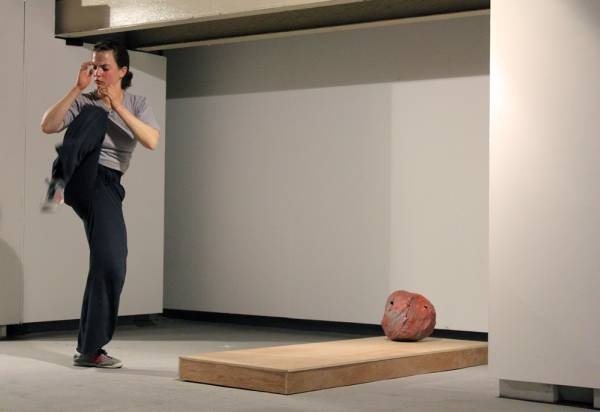 Often, when a film is illegally re-shot in a cinema, it is at an oblique angle and some of the image is lost. Glasgow-based artists Corin Sworn and Charlotte Prodger’s collaborative performance-film HDHB (2011) uses this reframing and compression to critique hierarchies of image quality, suggesting industrial modes of calibration as a process of sensory normalisation.

Working in collaboration, the artists developed SHOPLIFTERS SHOPGIRLS (2011) while in residence at Tramway, using the different functions and spaces of the building as a backdrop to a discussion about performance, ritual, theatricality, and the use and production of objects. This period of experimentation led to a live event at Tramway, which the artists have reinterpreted for the Biennial.

Tramway is an international art-space that commissions, produces and presents contemporary art projects. Claire Jackson is currently Visual Art Curator at Tramway, and has curated a number of exhibitions and events with international and emergent artists since 2008. Projects so far have involved significant new commissions and events with artists including Pablo Bronstein, Sebastian Buerkner, Christoph Büchel, Duncan Campbell, Phil Collins, Redmond Entwistle, Torsten Lauschmann, Lara Favaretto, and Hilary Lloyd. During her time at Tramway, Jackson has initiated significant research into the development of interdisciplary and event-based strands of programming.