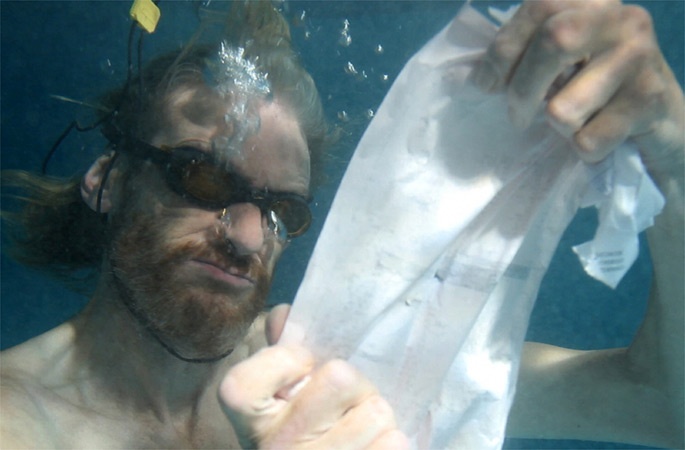 ★★★★ 'A cross between Pasolini, Beckett and Monty Python...frequently comical, but more often darkly demented' Time Out

'Mellors is becoming something of a major star within the latest generation of British artists.' Guardian

This spring, the ICA presents the first major solo exhibition in a UK public institution by Nathaniel Mellors. In recent years, Mellors has produced a distinctive body of work that combines video, sculpture and writing. The complex relationship between language and power is a recurring theme in his multifaceted work, typically manifesting itself in absurdist, humorous narratives which reveal a penchant for satire and the grotesque. For the ICA, Mellors installs Episodes 1, 2 and 4 from his new video series Ourhouse (2010-) alongside the animatronic sculpture, Hippy Dialectics (Ourhouse). Mellors also programmes a series of events in association with Mark Pilkington’s Strange Attractor and Junior Aspirin Records.

Ourhouse is set in a manor house in the English countryside. The series portrays the Maddox-Wilson family, an eccentric grouping whose roles and relationships begin to shift after the arrival of ‘The Object’ (an imposing male figure that the family fail to identify as a human being) arrives in the house and begins to consume and excrete their books. In doing so, The Object takes control of language within the house. The themes that are played out in the ensuing episodes are the product of the ingested, half-digested texts.

Nathaniel Mellors: Ourhouse at the ICA

Mellors combines a number of approaches, including drama, sculpture, film-making and music, to formulate an individual language with which to address contemporary issues. The basic scenario of Ourhouse is influenced by Pier Paolo Pasolini’s Teorema (1968). Ourhouse stars Richard Bremmer alongside Brian Catling, Gwendoline Christie, David Birkin, Johnny Vivash, Benedict Hopper and Patrick Kennedy. It hybridises Mellors’ interest in linguistic manipulation and absurdism with the form of the TV drama series. Its ambitious production approach has evolved from Mellors’ recent commission for BBC One The 7 Ages of Britain Teaser (which featured David Dimbleby performing alongside a prosthetic replica of his own face). The many layers and nuances that comprise the Ourhouse series also demonstrate Mellors’ interest in sculpture, particularly as it represents the objectification of ideas; the way forms can come to displace the ideas they purport to represent.

Episodes 1, 2 & 4 of Ourhouse (2010-) are installed at the ICA alongside Hippy Dialectics (Ourhouse), 2010, an animatronic sculpture of Richard Bremmer’s character ‘Charles ‘Daddy’ Maddox-Wilson’ whose face is doubled and joined together by its own hair. The exhibition continues in the ICA’s concourse; Mellors curates 3rd Leggg, a presentation of works by artists Mellors finds inspiring, most of whom are productive outside of the commercial contemporary art world. The artists are Robert Abel, Chris Bloor, Larry Cohen, Shah Jahan, Paul Lafolley, Tala Madani and Bob Parks.

Nathaniel Mellors on Ourhouse episodes 1, 2 and 4 at the ICA

The new publication Book A or MEGACOLON or For & Against Language published by Onomatopee (distribution by Art Data) featuring a selection of Mellors’ scripts alongside texts by John C. Welchman and Mick Peter will be available at the opening of the exhibition.