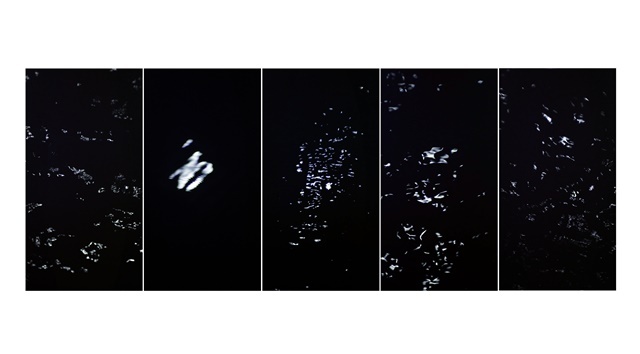 Man, Machine and Images in Motion

The programme takes Hamilton’s fascination with mobility, mechanisation, speed, and innovation as its starting point to question how contemporary artists in the field of moving image explore these concepts. At the time of Hamilton’s 1955 exhibition, film technology was a significant advancement that allowed artists to engage with new spatial and optical experiences. As an extension of this, the film programme will engage with moving image as a platform to further explore the relation of the medium to the spatial experience of Hamilton's exhibition.

The programme will revisit these concepts, along with the four themes in Hamilton’s exhibition: Aquatic, Terrestrial, Aerial and Interplanetary, and examine how they have evolved through globalisation and digital technologies. Works such as Jeremy Shaw’s This Transition Will Never End, (#6) (2008 – 2013) not only considers mobility but also explores the notion of intergalactic travel through the splicing together of cinematic depictions of wormholes, while Zineb Sedira traces the life cycle of the car by documenting the deconstruction of the vehicle, commenting on a system of built-in obsolescence. Evoking Hamilton’s interest in the aquatic, Murat Akagündüz questions the continuous development relating to the five largest dams constructed on the Euphrates river by juxtaposing the various currents of the Keban, Uzunçayır, Atatürk, Birecik and Karkamış dams into a single body of water. Mark Leckey explores concepts of mechanical mimesis by considering the human-machine relationship and forms of communication associated with artificial intelligence, while objects operate independently through a collage of shine, chrome and text in Elizabeth Price’s User Group Disco (2009).