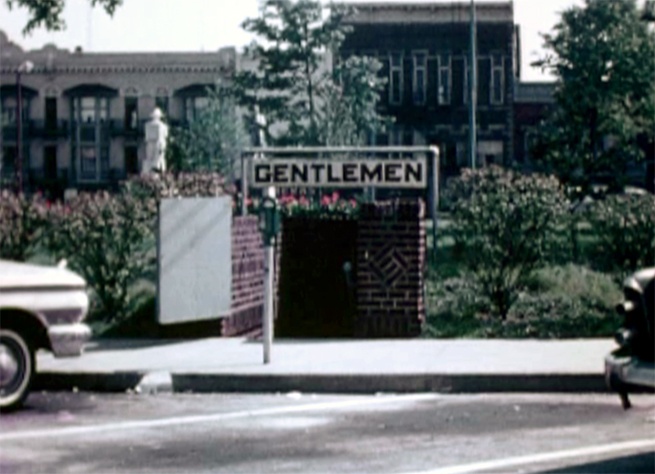 In 2007 the video artist William E. Jones presented Tearoom. Originally filmed in 1962 by Ohio police, Tearoom is surveillance footage, a blunt tool of oppression that documents men cruising in a public restroom. This footage was eventually used as evidence to prosecute the men for sodomy and public deviancy.

By exhuming this footage 40 years later, Jones reveals hidden dimensions through recontexualisation, offering up an open democratic space where age, class and racial boundaries break down, while remaining a poignant reminder of the anxiety and persecution these men were forced to endure.

Showcased prior to the screening is indie game developer and artist Robert Yang's game The Tearoom, a cruising simulation made in direct response to the film. In anticipation of censorship from the games platform Twitch, in a bold stroke of satirical provocation Yang replaced all of the penises with guns. The game has yet to be banned from the website.

Screening ahead of Tearoom is Et in Arcadia Ego (6 mins), a newly-commissioned film by filmmaker Sam Ashby. Ashby has taken recent discussions around the closure of queer safe spaces and focussed on the closure of public toilets. By documenting many of London's 'cottages' on Super8, Ashby presents them as a series of contemporary ruins evoking a lost language, structures becoming tombs where meaning is lost to time.

Tearoom presents a different range of contradictions... The film was not shot automatically by a machine alone.  A police officer had to stand for hours in a closet behind a two-way mirror watching men go in and out of a public toilet. He chose what to shoot... What was intended as an 'objective' document of deviant sexual activity has come to seem transparently subjective...

In the early 1960s, public opinion held the men in the film to be perverts and those who commissioned, shot, and used the film as evidence in court to be fine, upstanding citizens. Today, spectators are likely to form another opinion… - William E. Jones, zingmagaine, August 2011