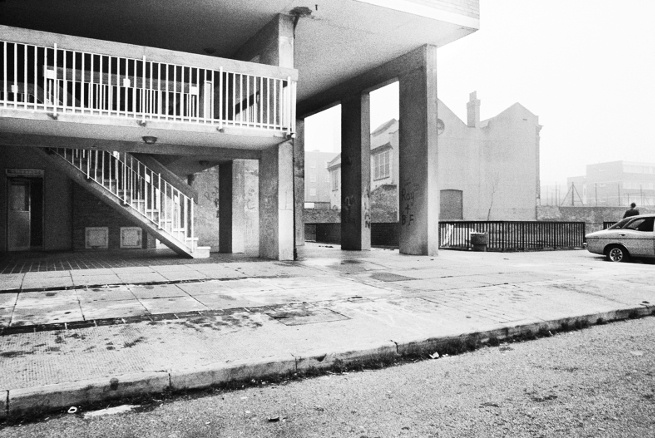 The panel present a fresh examination of this time, discussing the relationship between squatting and the rich DIY culture of music and art produced contemporaneously. With the housing crisis dominating the headlines today, Smiler’s exhibition serves as timely reminder of how the city has transformed and the panel pose questions about the direction it is taking and explore how dramatically different the city feels today.

Smiler’s exhibition documents a time when Rock Against Racism was prevalent and The Clash played a high profile RAR gig in Victoria Park. DIY culture was a way of life before corporate culture and branding subsumed, and political movements shared spaces with artists, bikers, musicians, drug dealers and prostitutes; creativity and anti-establishment rebellion was a way of life.

Photography provided the perfect medium to capture the culture and community of these squat locations, and Smiler’s photographs reveal intimate moments of the squatters’ everyday life, from portraits that show snapshots of the creative identities and unabashed sexuality of his friends, to images that illuminate how they, as outcasts, experienced city life, capturing the rebellious and chaotic spirit of the time.

Songwriter and musician Viv Albertine was the guitarist in the hugely influential female punk band The Slits. A confidante of the Sex Pistols and the Clash, Viv was a key player in British punk culture. Alongside The Slits, she collaborated with numerous musicians, including Adrian Sherwood, before marking out a career in television and film production. After a hiatus of twenty-five years, Viv's first solo album, The Vermillion Border, was released in 2012 and her memoir Clothes, Clothes, Clothes. Music, Music, Music. Boys, Boys Boys was published by Faber & Faber in 2015.

Neal Brown has written about art for Art Review, Flash Art, Frieze, Art Monthly, Modern Painters and Parkett, and is author of a number of books on contemporary art. His most recent publication is about Mark Smiler Cawson, published by Sorika. Brown has been in post-punk bands, been actively engaged in social housing since the 1970’s, and has had significant involvement in alcohol and drug recovery charities and organisations.

Over the past 40 years James Francis Cauty (aka Jimmy Cauty) has distinguished himself as a musician, record producer, artist and cultural provocateur.  Cauty was co-founder with Bill Drummond of The KLF and The Justified Ancients of Mu Mu, and with Alex Paterson, The Orb.  As part of The K-Foundation, Cauty is known for his seminal actions, The 1994 K Foundation Award and Watch the K-Foundation Burn a Million Quid (1994). His roguish and voluble approach has earned him a cult following for work that remains radical, responsive and darkly comical.

Known for his distinctive approach to figurative painting, artist Peter Doig was born in Edinburgh in and now lives and works in Trinidad. Raised in Canada, Doig moved to London in 1979 and studied at the Wimbledon, St Martin's and Chelsea Schools of Art. Doig’s solo exhibitions in 2015 include the Louisiana Museum of Modern Art, Humblebaek, touring from Fondation Beyeler, Basel (2014 - 2015); this follows a previous major solo presentation at the National Galleries of Scotland, Edinburgh, which subsequently toured internationally.

Rut Blees Luxemburg is an artist who deals with the representation of the city and the phenomenon of the urban, ranging from large-scale photographic works to public art installations and operatic mise-en-scène. In 2004 her collaborative opera Liebeslied/My Suicides was performed at the ICA. Her exhibition London Dust can currently be seen at the Museum of London. Her work is collected by many public institutions including Tate Modern, V&A and the Centre Pompidou. Rut Blees Luxemburg is a Reader in Urban Aesthetics at The Royal College of Art.