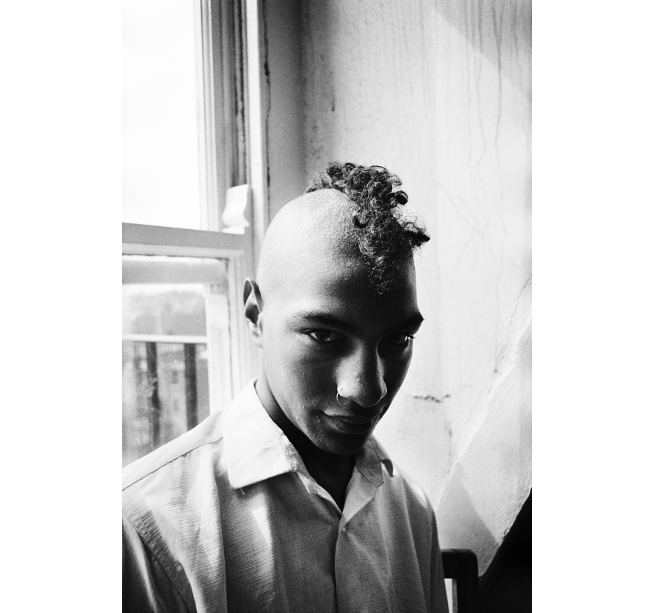 An exhibition of unseen photographs by Smiler (aka Mark Cawson) of London squats from the late 1970s, 1980s and early 1990s. The content of the exhibition focuses on a body of work that Smiler mainly shot between West London and Kings Cross. The exhibition consists of black and white images taken on an analogue camera.

“I used the camera like a storm anchor helping me to navigate and freeze a spinning world of change and flux.” Smiler

Against the backdrop of social and political upheaval, young people across the city were drawn to squats by the prospect of a place to live, but also by an identity and a sense of community. Smiler’s photographs document the people who lived in squats across the city, at a time when salvage culture was the norm. Moving from one community to another, between postcodes, Smiler captures a city in transition and documented people he met while himself “trying to manage a deep sense of alienation”. Entire streets of condemned housing sat empty across the city throughout the period - a situation that facilitated large communities to form in places such as Cromer St, the School House in Hammersmith and Queen's Gate.

Photography provided the perfect medium to capture the culture and community of these squat locations. Taking pictures, collecting photo-booth pictures and hanging on to found ephemera enabled Smiler to do this. His photographs reveal intimate moments of the squatters’ everyday life, from portraits that show snapshots of the creative identities and unabashed sexuality of his friends, to images that illuminate how they, as outcasts, experienced city life, capturing the rebellious and chaotic spirit of the time.

Drugs and squatting went hand in hand but music and art also attracted people. This was the time when Rock Against Racism was prevalent and The Clash played a high profile RAR gig in Victoria Park. DIY culture was a way of life before corporate culture and branding subsumed. Political movements shared spaces with artists, bikers, musicians, drug dealers and prostitutes.

With the housing crisis dominating the headlines today, this exhibition serves as timely reminder of how the city has transformed and poses questions about the direction it is taking. Smiler’s compelling photographs are a lens on London as a hotbed of rebellious anti-establishment sentiment and brings into focus how dramatically different the city feels today.