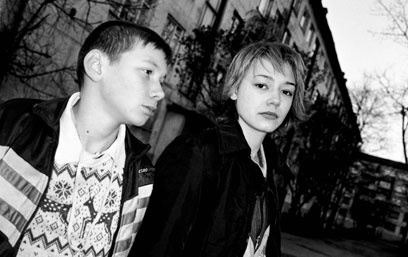 "this terrible, forthright excursion into the heart of darkness represents a grown master's mature masterpiece", Peter Bradshaw, The Guardian

Despite its grim subject matter – child prostitution and the ordeal of illegal immigrants – Lilya-4-ever is above all a cinematic explosion of energy, its camerawork synthesising with the musical soundtrack and achieving Moodysson’s goal: "the effect of the audience being hit by a bulldozer"

Lilya, a teenager living in a run-down council estate somewhere in one of the former Soviet Union states, is abandoned by her mother, who immigrates to the US with her boyfriend. Lilya is forced to prostitute herself, and when smooth-talking Andrej promises her a new life in Sweden, Lilya deserts her only friend, the young boy Volodja, who unsuccessfully tries to convince her not to go. Once in Sweden, however, Lilya is, as an illegal immigrant, literally and metaphorically imprisoned in a life even more nightmarish than any of her previous experiences. Lilya 4-ever dominated the Swedish equivalent of the Oscars, the Guldbaggen awards, where it won five major awards.

Part of: The Films of Lukas Moodysson