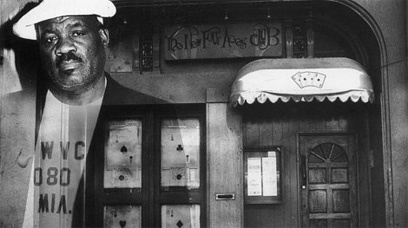 Legacy in the Dust: The Four Aces Story

Founded in the early 60s by Jamaican east Londoner Newton Dunbar, Hackney's Four Aces Club welcomed some of the greatest musician in the world. It saw a huge range of performers play, including Desmond Dekker, Prince Buster, Jimmy Cliff, Ann Peebles, Percy Sledge, Ben E King and Billy Ocean, then later Bob Marley, Chrissie Hynde, The Slits, Sex Pistols and Bob Dylan, before it became a home to previously illegal acid house nights. Charting the club's history right up to its untimely demise as a victim of 2012 Olympic urban regeneration, Legacy in the Dust features personal and often riveting accounts by its founder and many of those who enjoyed nights out at this most infamous of London clubs.