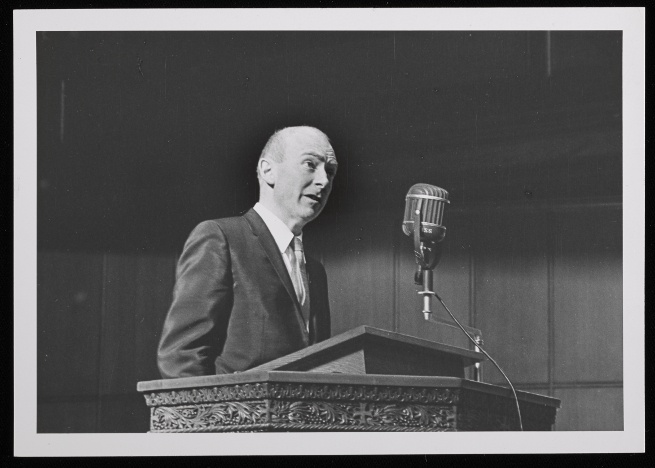 This panel discussion reflects on the work of Lawrence Alloway (1926–1990), a key figure in the development of modern art in Europe and America from the 1950s to the 1980s. Speakers include art historians Courtney J. Martin, Anne Wagner and Victoria Walsh, and Art Review Editor Mark Rappolt.

Alloway was a leading member of The Independent Group who met at the ICA, London, where Alloway also worked as Assistant Director. This event marks the launch of Lawrence Alloway: Critic and Curator (Lucy Bradnock, Courtney J. Martin, and Rebecca Peabody, 2015, Getty Publications).

Credited with coining the term ‘pop art’, Lawrence Alloway also championed conceptual art and feminist art in America. His interests as a critic and as a curator at the Solomon R. Guggenheim Museum in New York ranged widely, including architecture, design, earthworks, film, neorealism, science fiction, and public sculpture. Largely self-taught, Alloway was a noted educator and a prolific writer who sought to escape the conventions of art historical discourse. This new publication,Lawrence Alloway: Critic and Curator, illuminates Alloway’s crucial role in shaping the field and anticipating approaches such as social art history and visual and cultural studies.

This panel discussion is followed by a book launch and drinks reception.

Courtney J. Martin is an assistant professor in the History of Art and Architecture department at Brown University. As an art historian of the modern and contemporary fields, her scholarship is invested in the ways in which the post-1968 period altered art and artists. Her writing and teaching is concentrated in three areas: twentieth century British art, sculpture studies and the history of art criticism. She received a doctorate from Yale University in 2009 for her research on twentieth century British art and architecture and is the author of lengthy essays on the work of many modern and contemporary artists.

Mark Rappolt is editor-in-chief of ArtReview and ArtReview Asia. He founded the former in 2013 and the latter has been in publication since 1949 and counted Lawrence Alloway among its regular contributors during the early 1950s. He writes about art and architecture for a number of publications and books include monographs on the architects Frank Gehry and Greg Lynn as well as artists ranging from Alex Katz to Slater Bradley.

An art historian, critic and teacher, Anne Wagner writes on a range of topics in 19th, 20th, and 21st century art, especially sculpture. Class of 1936 Professor Emerita at the University of California, Berkeley, she is now based in London where she is a visiting professor at The Courtauld Institute of Art. Her books include Jean-Baptiste Carpeaux: Sculptor of the Second Empire, 1986; Three Artists (Three Women), 1996; Mother Stone: The Vitality of Modern British Sculpture, 2005; and A House Divided: On Recent American Art, 2012.

Victoria Walsh, Head of Programme Curating Contemporary Art, Royal College of Art. She is a curator and active researcher whose projects span from the post-war period to the contemporary with a particular focus on interdisciplinary collaborations between artists, architects and designers; performance art and its documentation; the reconstruction of exhibitions; practices and histories of gallery education and audiences; issues of curating in relation to the digital, hypermodernity and globalisation. Prior to joining the Royal College of Art in 2012, Victoria Walsh was Head of Public Programmes at Tate Britain (2005-11).

Presented in partnership with, and supported by the Getty Research Institute