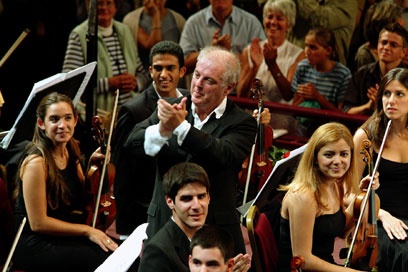 Knowledge is the Beginning + Don Quixote in Jerusalem

Knowledge is the Beginning: Daniel Barenboim and the West Eastern Divan Orchestra

Nominated for the International Emmy Awards in the category of arts programming.

World-renowned conductor Daniel Barenboim and Palestinian scholar Edward Said generated controversy and admiration with the founding of their West-Eastern Divan Orchestra in 1999. This documentary follows the unique musical collaboration, dedicated to furthering the cause of peaceful coexistence in the Middle East, bringing together young musicians from both sides of the divide: Syrians, Jordanians, Egyptians, Palestinians and Israelis.

For Said the orchestra was "one of the most important things I have done in my life". For Barenboim, the orchestra is a metaphor for what could be achieved in the Middle East.

Don Quixote and Sancho Pancho arrive in Israel in the year 2004. They reach a hill on the Jerusalem road overlooking the wall which divides Israel and the Palestinian Authority. They inspect their target and make their plans.

Thescreenings will be followed by a panel discussion:

The Israeli-Palestinian Conflict - What Has Film Got To Do With It?

Three filmmakers whose life and work is invested in the region will present their views and invite the audience to engage in an open discussion.