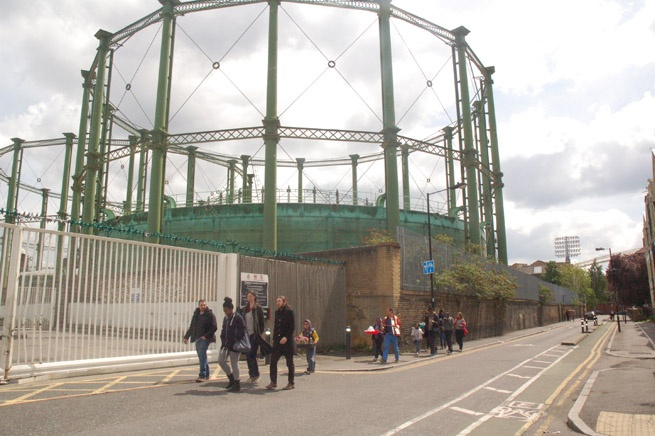 The second public event within Koki Tanaka’s Precarious Tasks #9, 24hrs Gathering takes place as a Friday Salon talk. The event examines participatory practice inside and outside the gallery by mapping some of the projects and thoughts from the artists and curators on the panel.

The talk will reflect on notions of community as well as questions of audience, skills exchange and co-production.

Frances Williams is a writer and curator. She was a contributor to the book Gallery as Community (Whitechapel, 2011) and was formerly Head of Education at the South London Gallery.

Katie Orr has been Gasworks' Participation Programme Coordinator since 2009. In this time she has developed various projects, events, commissions and residencies within the Even Better Together programme which connects artists with local audiences living and working in Gasworks' neighbourhood of Oval, Vauxhall and Kennington. Projects within Even Better Together include the ongoing intergenerational Peer Group (in collaboration with Albert Potrony) who meet regularly to devise and develop collaborative art projects together, and working with Abigail Hunt on Multiple Voices, a forum which brings project partners and participants of the participation programme together with other professionals working locally, practitioners from other fields, artists and funders in art making sessions. Both the Peer Group and Multiple Voices are durational approaches that test and explore the role contemporary art practice can play within a locally focused setting.

Albert Potrony works with installation, sound and video. Participation is a key element in his projects. His project Faith, a multi-channel video installation with material spanning across Nigeria and the UK, was shown at the Whitstable Museum and Gallery. He previously developed Tate Other, a collaborative video and performance that took place at Tate Modern in September 2012 as part of the Worlds Together Conference.  Albert was commissioned to produce The Potential Space, a 20-minute film, for Anxiety Festival 2014, which looks at the parallels between the process of making objets within a mental health setting and artistic practice. He next project is Another Utopia, a collaborative work that explores the squatting and housing co-operative movements of the late 70s and 80s in London. Albert has been working on participatory projects for galleries and museums for the past ten years, among them Gasworks, Tate, Whitechapel, Camden Arts Centre and Next Generation at the National Theatre.

Lawrence Bradby is half of the collaborative practice Townley and Bradby. They make work in spaces that are already being used by someone else. This work has included games, picnics, turf twinnings, public conversations and site-specific drawings.