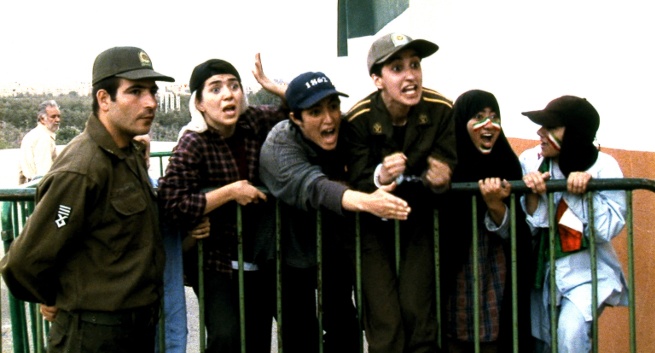 This critical comedy explores the fraught gender politics of Iran as well as notions of patriotism and honour within the real, unifying atmosphere of a national sports event. With a cast of non-professional actors, director Jafar Panahi shot Offside at the actual match of Iran vs. Bahrain, a qualifier for the 2006 World Cup, allowing the film’s conclusion to be decided by the outcome of the game.

Offside tells the story of six young female football fans attempting to defy Iranian law which forbids women to attend sporting events by sneaking into a match, a tale inspired by Panahi’s daughter’s real-life prohibited trip to a football game. The film follows the girls’ subsequent arrest and confinement by three young, bored recruits of the national service in a holding pen just outside the stadium (where they can frustratingly hear, but not see the match) and muses on the shared feelings that sports excite.