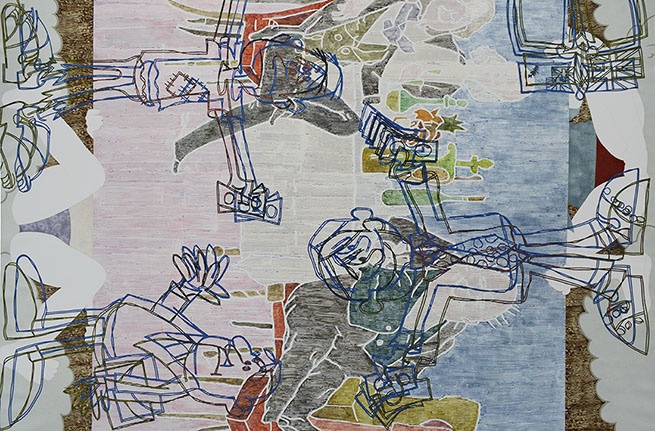 Warm Ties is a solo exhibition of Australian artist Helen Johnson, in collaboration with Artspace, Sydney. Johnson weaves and overlays historical and contemporary signifiers creating points of tension and reflection through the medium of painting. In this exhibition, the complex colonial relationship between Australia and Britain is dealt with on the level of the body, using large-scale paintings mounted to a structure that zigzags through the space.

An economy of images is established within and between paintings; some are given precedence, others made barely legible. The paintings are the size of theatre backdrops, in excess of the body, becoming sets before which to act. Mindful of the ICA’s location on The Mall, close to the seat of power that served as the originary point of Australia’s colonisation, some images concerning Australia’s fraught relationship to British culture and power are freighted back to their point of origin. Humour plays an important role in reflecting on this return—or perhaps more accurately, persistence—of the repressed.

In one painting, a man masturbates as the lyrics to the Australian national anthem are whispered into his ear: ‘For those who come across the seas we’ve boundless plains to share’, a far cry from some of Australia’s current strict immigration policies. He stands before an image of Queen Victoria overlaid with handcuffs, whips and shackles used to punish colonial convicts. Hands reach from inside this image to smear the paintwork.

The zigzag structure within the exhibition is derived from the layout of Canberra, Australia’s capital city. Designed by Walter Burley Griffin, this pre-fabricated modernist city was imposed on Ngunnawal country in the early 20th century. Here, the angles of Masonic symbols imbued in Burley Griffin’s plans are reduced to a gesture, a mere squiggle across the space.

This body of work resituates 19th century images of the White Man as an imperialist brute, a sycophant and a greedy solipsist, scaling them up and reasserting them – they are the founding historical legacy for non-Indigenous Australians. The works repurpose and re-examine images of rituals used by colonists in an attempt to legitimise their occupation of Australia; ‘civilised’ procedures that thinly masked widespread massacres, dispossessions and attempted destructions of sophisticated, ancient cultures.

Helen Johnson is an artist based in Melbourne. Recent solo exhibitions include Barron Field as part of the 2016 Glasgow International, Slow Learners at Château Shatto, Los Angeles, 2015 and Cafe Fatigue at Sutton Gallery, Melbourne, 2015. She has recently exhibited work as part of Painting. More Painting at the Australian Centre for Contemporary Art; In my absence at Jocelyn Wolff, Paris; and Pleasure and Reality at the National Gallery of Victoria, Melbourne. In 2015 she published a book titled Painting is a Critical Form, developed from a PhD in Fine Art completed at Monash University where she is also a lecturer. Johnson is represented by Château Shatto in Los Angeles, Pilar Corrias Gallery in London and Sutton Gallery in Melbourne.

Helen Johnson's Warm Ties was co-commissioned by ICA, London and Artspace, Sydney and has been assisted by the Australian Government through the Australia Council, its arts funding and advisory body. Its development and presentation is supported by Commissioning Partner the Keir Foundation. The exhibition will be touring to Chapter, Cardiff (1 July – 24 September 2017).