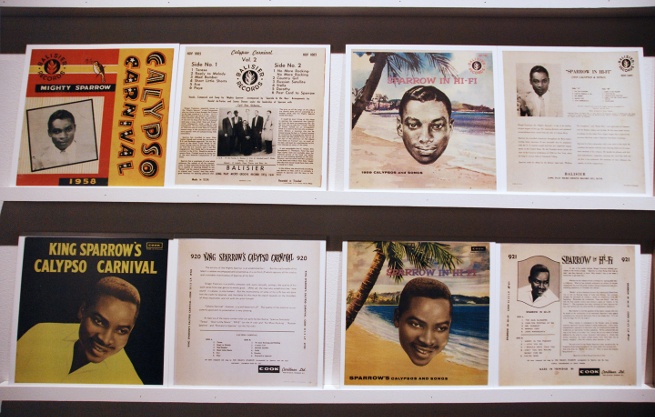 Sparrow Come Back Home by British artists Carmel Buckley and Mark Harris takes its title from a 1962 album by calypso singer Mighty Sparrow, which points out the irony of being appreciated only once he had left Trinidad for the US. Mighty Sparrow, born Slinger Francisco, began song writing and performing in the intensely competitive public arena of Trinidad Carnival in the early 1950s and although he has recently been seriously ill, Sparrow still performed during the 2014 Trinidad Carnival. His first vinyl LP, Calypso Carnival, was released in 1958, with his most recent work, Sparromania! released in 2011. His entire body of work has been collected, locating almost two hundred LPs and 12-inch singles from different Caribbean islands as well as in cities of the West Indian diaspora such as New York, Toronto and London. West Indians acclaimed Sparrow as among the most important calypsonians of the late twentieth-century for the humorous topicality and the lyrical and musical inventiveness of his songs. In spite of this acclaim, Sparrow, and calypso more generally, continues to be little understood and appreciated in comparison with other world music.

This exhibition shows representations of Sparrow’s records alongside an archive of printed material relating to his music, revealing the depth of calypso culture. Carmel Buckley and Mark Harris will install their work of 228 ceramic tiles, each approximately the size of an LP, depicting the front and back of record covers from Sparrow’s entire career. The images comprise of photo decals fired onto the tiles, fixing his music into a kind of permanent memorial.

The installation of tiles is accompanied by an archive of literature and photographs relating to calypso and Trinidadian social and political issues often addressed by these songs. Besides photographs, posters and records by rival calypsonians from the period, the archive includes poetry by John Agard, Kamau Brathwaite, Lasana Kwesi, Abdul Malik and Derek Walcott who have written powerfully about calypso, Carnival and steel drum music. There are works by Earl Lovelace whose remarkable 1979 novel Dragon Can’t Dance includes a portrayal of a calypso singer clearly based on Sparrow. Also included will be a 1963 book of Sparrow’s lyrics, One Hundred And Twenty Calpysoes to Remember, as well as Gordon Rohlehr’s key publication Calpypso & Society in Pre-Independent Trinidad along with sound and video components to the archive.

Supported by The Ohio State University, College of Arts and Sciences and the University of Cincinnati.

The ICA Fox Reading Room is made possible by the generous support of the Edwin Fox Foundation.