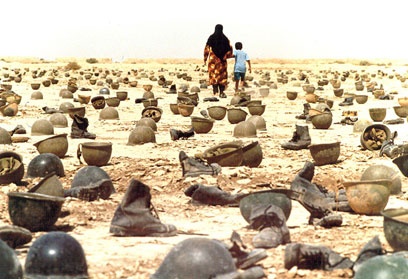 Based on the director's own experiences as a female war correspondent, Goodbye, Life dramatically unfolds the tragedy of combat from a woman's perspective. A journalist in the throes of a divorce pulls strings to be sent to the front in the Iran-Iraq war. Secretly hoping to go out in a blaze of glory, instead she finds her vision of the world completely changed by war. Goodbye, Life is the story of a woman who by saying goodbye to her previous life finds a new way to live.

Born in 1954 in Gorgan, Ensieh Shah-Hosseini is a graduate of Cinematography. As a researcher and novelist, she has been a war reporter, documentary filmmaker and a professional screenwriter. Goodbye, Life is her second feature film.

"Goodbye Life confounds expectations by heading in a wholly different direction from a Western war movie. Instead of a blustering, heroic heroine coming face to face with tragedy, first-time director Ensieh Shah-Hosseini empathizes with a confused, scared young protagonist whose chief goal is to hightail it back to Tehran" Variety