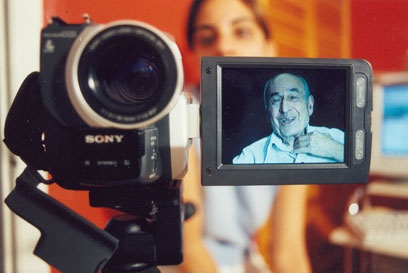 The Genocide in Me + Q&A

An angry, tender and funny film, The Genocide in Me deals with the impact of the 1915 Armenian Genocide on the life of young filmmaker Araz Artinian, who has had to carry this legacy since her childhood. In this personal journey through recent Armenian history, Artinian, torn between her father's passionate commitment to the Armenians of the Diaspora and her own personal needs, confronts the reality of living in a multicultural melting pot, and asks herself the universal question "Where do I belong?". From Armenia to Egypt to Canada, Artinian traces her parents' and grandparents' history, trying to understand their fervoured patriotism and it's effects on her life, eventually travelling to Turkey to see for the first time the river she was named after.

The documentary deftly weaves together 8mm film footage shot by the filmmaker's grandfather from the 1940's to the 1980's, with riveting photographic archives of the Genocide, the filmmaker's present-day video journals, and a deeply honest narration. Through moving interviews with the last survivors of this Genocide in the USA and through her risky trip to Turkey, Artinian goes back to the origin of her father's obsession, an obsession born of the Turkish denial and the fear of losing the Armenian culture.