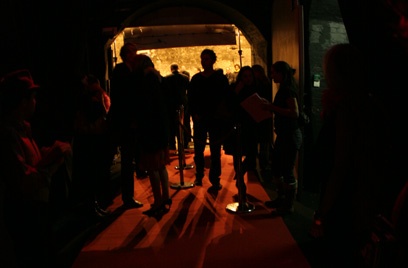 Future Shorts is one of the leading and most innovative short film labels. Since 2003, Future Shorts has created a rapidly expanding network that allows filmmakers the opportunity to have their work seen on the largest theatrical platform worldwide. Passionately believing in getting short films seen and creating a culture around the medium, Future Shorts is recognized by filmmakers, the industry and press alike as the cutting-edge short film label. Future Shorts is a worldwide monthly film festival as well as a distributor, sales agent, consultancy service, event company and DVD label. Each month Future Shorts curates a programme of world-class short films and showcases it in London, throughout the UK and across the world.

"There once was a young man who swallowed a cat, there once was a cat who swallowed a moth..." and so it begins. Face/Wrong Productions presents the world of "The Cats Pyjamas are Human", a stop-motion piece stuck somewhere between Stoppit And Tidyup's little cousin who once went out with Morph's neighbour but they broke up at a Harryhausen party via the local art and supplies store. It's a world where men can swallow cats and talking cats can swallow moths.

"The Cats Pyjamas are Human" is a dystopia of Claymation and cardboard, rolled into one short trip of a film. Featuring original music by eclectic band Chapter 24, it's a 10 minute delve into a world unlike any other.