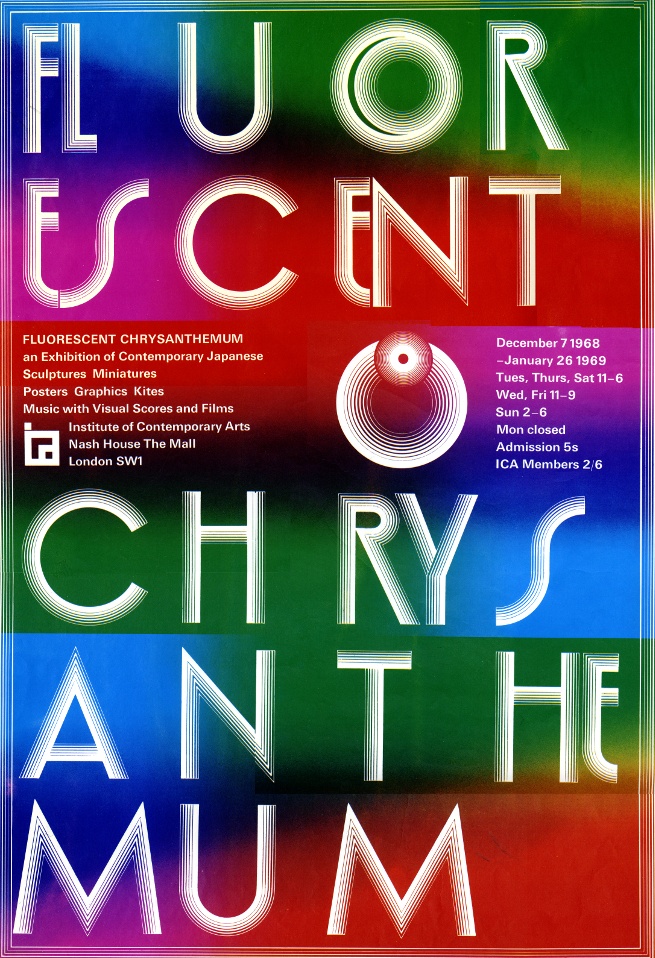 "A show of Japanese fluorescent sculptures, Japanese abstract cartoon films, graphics and kites is presented at the ICA Gallery in a superbly imaginative way. This is an aesthetic performance rather than an art show. I cannot think of a more exciting way to spend a morning or an afternoon in town." What’s on in London, 13 December 1968

This display highlights the ICA’s rich heritage as a home for radical contemporary arts and culture. In 1968 Fluorescent Chrysanthemum was the first presentation of experimental Japanese art, music, film and design in Europe – showcasing a group of artists never before seen in the UK, including Kohei Sugiura, Jiro Takamatsu, Ushio Shinohara, Tadanori Yokoo, Seiichi Hayashi, Yoji Kuri and Tatsuo Shimamura.

Fluorescent Chrysanthemum, originally curated by Jasia Reichardt, comprised of contemporary Japanese sculptures, miniatures, posters, graphics, kites, music with visual scores and films. The title referred to the fluorescent effects in many of the works, alongside reference to the Chrysanthemum flower as the Imperial Seal of Japan. The show was divided into sections: Miniatures, Graphics, Posters, Sculptures, Film and Music. Kohei Sugiura designed the exhibition graphics and the highly distinct installation of the show, working closely with Reichardt. The catalogue itself was also innovative, printed on a large folded single sheet in two versions (one black on white, the other white on black), both of which unfolded with the exhibition poster printed on the other side. This display looks back through this archive material, examining the importance and impact of the 1968 show. Now in its 70th anniversary year, the ICA is extending the research and profiling of its legacy with additional support from the Heritage Lottery Fund.

Writer and curator Jasia Reichardt was Assistant Director of the ICA from 1963-71, during which time she curated exhibitions such as Cybernetic Serendipity (1968) and Fluorescent Chrysanthemum (1968). From 1974-76 Reichardt was a director of the Whitechapel Art Gallery. The 1968 Fluorescent Chrysanthemum exhibition was supported by Tokyo and Minami Galleries.