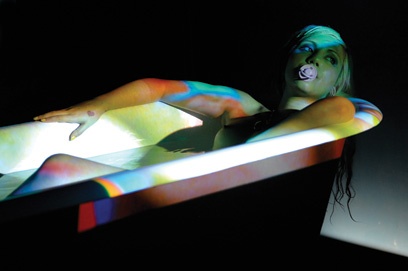 December's cinematICA event brings you the 2007 slate of Cinema Extreme - a rare chance to see the entire line-up of newly made short films and discover five exciting new visions. We hope to welcome all of the directors to the ICA to introduce their films, followed by further discussion in the bar post-screening.

Cinema Extreme was created in 2002 by Film4 and the UK Film Council's New Cinema Fund to seek out and develop film-makers with a distinctive directorial voice and cinematic flair. So far, 19 films have been commissioned. They have been shown at festivals around the world and won numerous awards, including Best Short at the Edinburgh International Film Festival (Duane Hopkins' Love Me Or Leave Me Alone), several festival awards for Simon Ellis' Soft and the Best Short Film Oscar for Andrea Arnold's Wasp. Cinema Extreme is a place where serious film-makers can explore their vision in partnership with major financiers who have the potential to fund their first feature, and it is the only scheme of its kind in the UK.

This year's films are: New Love, a love story set in a super-rational future, where the irrational logic of desire causes chaos (Dir Laurence Coriat, 20 mins); Terra Firma, the tale of Quentin, an entertainer working on a North Sea passenger ferry who is all at sea since his wife and daughters left him (Dir Johnny Barrington, 28 mins); Alex and her Arse Truck, about a scooter-riding zelophile Baby Shoes, his nymphomaniac girlfriend Alex, her other lover Nylon, and a pair of drug dealing lesbians called Manina and Javotte (Dir Sean Conway, 16 mins); Much Ado About a Minor Ting, where Rene returns to London in search of his former sweetheart, and finds there is a £150 price on his head (Dir Jesse Lawrence, 27 mins); and Island, where a maritime warden investigates an unauthorised presence on a private island (Dir Matt Palmer, 15 mins)