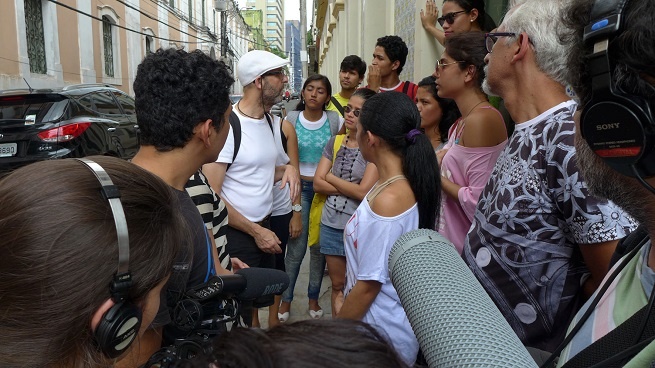 Take part in this free filmmaking workshop and be part of your own film crew to create a 60 second film. Over two days, you will work with filmmaker Alex Reuben to plan, shoot and edit a short film. The finished films will be screened for an audience as part of the Into Film Festival.

Alex Reuben is an award winning filmmaker with a background as a DJ and in art and design.

Reuben makes movies characterised by dance, music and architecture. Routes (Dancing to New Orleans) – a road-movie set during Hurricane Katrina – was selected in the ‘Top 20 Movies of the Decade’ (Geoff Andrew, BFI/Time Out).

He has been commissioned by ACE, Sadler’s Wells, Channel 4 TV, DanceDigital and the BBC, with awards from British Council and Jerwood.

Reuben’s films are exhibited by Picturehouse and Curzon Cinemas. He is a lecturer at Camberwell and Central Saint Martins College of Arts and currently directing ‘Cinderella (RockaFela)’ for the Wellcome Trust.

This workshop is designed for ages 16-19. Please bring your smartphone, stills camera or whatever equipment you have to the workshop.