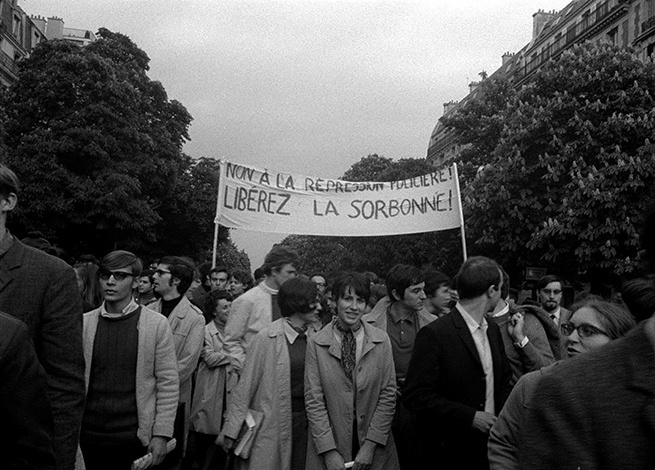 Essay Film Festival 2018: No intenso agora (In the Intense Now)

This screening is a UK premiere, and is followed by a conversation between the director João Moreira Salles and Lúcia Nagib of the University of Reading

A personal and historical essay film about the intensely dramatic political landscape of the late 1960s, João Moreira Salles's No intenso agora moves between his family history, notably the holiday movies shot by his mother on a visit to Maoist China at the time of the Cultural Revolution, and a wide range of archival footage recording some of the student-led protest movements and quasi-revolutionary events that nearly turned the world upside down in the summer of 1968.

With the fiftieth anniversary of France's May '68 on the horizon, No intenso agora provides an original and by no means uncritical perspective on the much-celebrated Parisian student protests that are often presented as the epicentre of a global earthquake of strikes, demonstrations and riots that spread across Europe and the world in the late 1960s.

While much of the film focuses on the French experience of the intense now of 1968, when 'bliss was it in that dawn to be alive, but to be young was very heaven!', Salles's essayistic account of the period approaches the topic from a number of different angles, starting with his personal fascination with the beautiful colour images that his mother filmed while holidaying in China in 1966, the year when Maoism became a buzzword in Western media discourse, and then intertwining his family’s experiences in Paris in the late 60s with accounts of key political moments of the decade, ranging from a military coup in his native Brazil to the crushing of the Prague spring by the Soviet Union.

But the dominant motif is mai soixante-huit and the film's star—hero, clown or villain, depending on your point of view—is undoubtedly Daniel Cohn-Bendit, the charismatic and media-savvy leader of the Parisian student movements, whose ironic distance from the events that made his name, and that have haunted him ever since, Salles seems largely to share, although the film never veers into the kind of vulgar cynicism that would seek to dismiss the dramatic revolutionary momentum of the times as mere illusion, or, worse, as a media simulacrum of revolt fabricated by Guy Debord's 'society of the spectacle’.