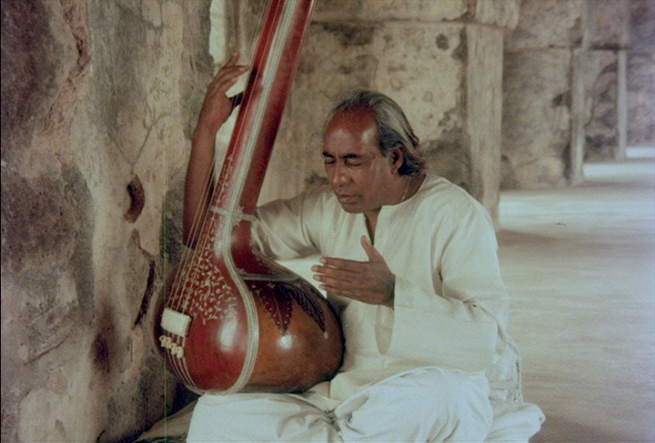 One of the most beautiful documentary essays directed by Mani Kaul. The filmmaker, who was himself a performer of Dhrupad, an ancient form of classical music originating in northern India, renders the formal principles and structures of this musical genre by purely cinematic means as a sensual orchestration of space and time. The film features the members of the Dagar family and the director's own music teachers: Zia Mohiuddin Dagar, playing the rudra veena, a large stringed instrument, and his brother, the singer Faruddin Dagar.

Mani Kaul wrote about his film:

It is a music without notation. In a sense, it is not even possible to notate this music; it is too complex. There are continuously ascending and descending tones, and it is impossible to say that these tones follow this or that note. The tones are always traveling in the dissonant areas between notes.

I was especially interested in how the Indian musicians transmit the tradition of their music orally. A student can study this music for years and never write a sentence in a notebook. You can only learn the music by continuously listening and practicing until you begin to elaborate it in your own way. The secret of the survival of the traditions of Indian music is deeply linked with opening the disposition of the disciple, the pupil.

In collaboration with the Courtisane Film Festival and the Otolith Group, and with the support of Birkbeck Institute for the Humanities