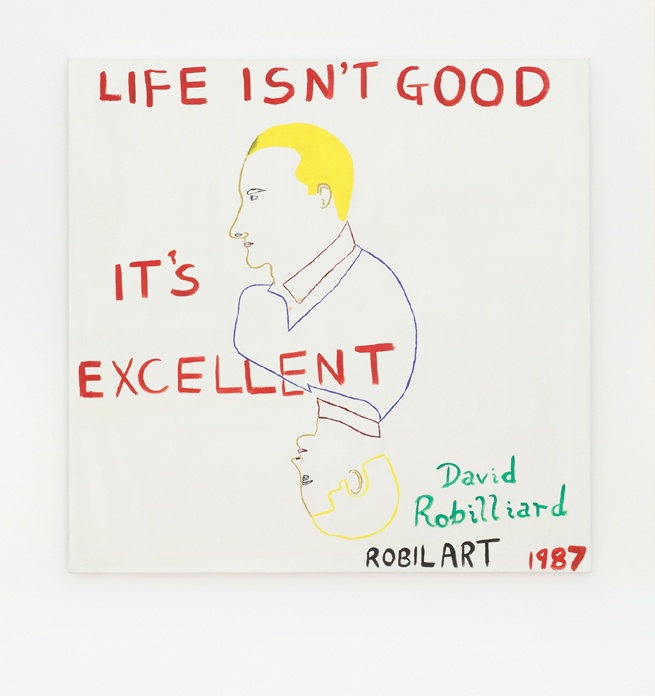 David Robilliard: The Yes No Quality of Dreams

Support us by becoming a member or purchasing an ICA edition. To be invited to forthcoming exhibition Private Views sign up to our newsletter.

'Hopefully, this exhibition of paintings from the last few years of his life marks the start of his artistic rehabilitation, because his work really is utterly delightful' ★★★★
- Time Out
'with a strong dose of lust, cynicism and sadness, [the pictures] act as a nuanced, touching portrait of an artist who died far too young'
- AnOther Magazine

The ICA brings together a selection of paintings by London-based poet and painter David Robilliard in the first UK institutional exhibition for over twenty years. These intimate paintings combine figurative elements with text taken directly from Robilliard's own poems. Coded and knowing, his evocative prose alludes to intimate sexual encounters and passing infatuations that ultimately conjure an image of 1980s queer London.

Robilliard moved to London in 1975 and would become close friends with Gilbert & George, momentarily appearing in the film The World of Gilbert & George (1981). Throughout the 1980s Robilliard published books and postcards of his poetry, as well as contributing to publications such as The Fred, Square Peg and The Manipulator. Robilliard was described by Gilbert & George as ‘the new master of the modern person’.

Robilliard’s paintings appeared in numerous gallery exhibitions during his lifetime, as well as exhibiting in venues such as London's Hippodrome and L'Escargot restaurant. In 1993, a major retrospective was held at the Stedelijk Museum, Amsterdam.

The exhibition is accompanied by an ICA Publication The Yes No Quality of Dreams, which gathers an extensive collection Robilliard's paintings and poetry, a new essay by Andrew Wilson, and a CD of Robilliard reading a selection of his poetry. Available from the ICA Bookshop for £18.

The book was launched with a discussion event examining Robilliard’s painting and poetry on Friday 9 May. Part of Culture Now, this panel was chaired by ICA Executive Director Gregor Muir and panellists included Louisa Buck, Toby Mott and Charlie Porter.

Supported by the David Robillliard Exhibition Supporters Group including Aurel Scheibler, among others.

With thanks to support from