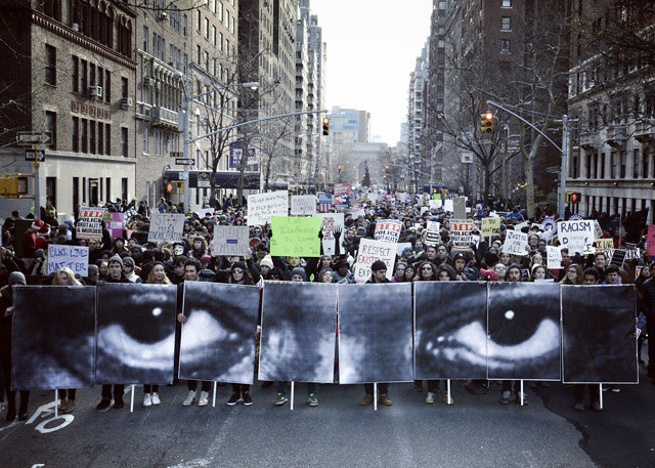 The rise of the #BlackLivesMatter movement in the US, after a series of high-profile police killings of people of colour and centuries of racist brutality, has raised the issue of policing and mass incarceration to the central political question of the age. Academics Christina Heatherton and Jordan T. Camp, and musician, producer, and artist Fatima Al Qadiri discuss the recently published Policing the Planet: Why the Policing Crisis Led to Black Lives Matter (Verso, 2016).

In Policing the Planet, academics Christina Heatherton and Jordan T. Camp map the rise of broken-windows policing and how this led to the current policing crisis. Broken-windows policing led to a shift in state policy from providing services to improve communities to a focus on security and crime-prevention. Through this, the police have been endowed with the arbitrary capacity to regulate the lives of the racialised poor in both the US and increasingly in the UK. The recent examples of the police killings of people of colour in the UK, from Mark Duggan and Smiley Culture to Sarah Reed, has shown that the issues raised by the #BlackLivesMatter movement are as relevant here as they are in the US.

Fatima Al Qadiri is a Kuwait-born, Berlin-based musician, artist and producer. Her latest album Brute was released earlier this year with Hyperdub, and was inspired by the #BlackLivesMatter movement and the rise in police brutality.

Jordan T. Camp is a postdoctoral fellow in Race and Ethnicity and International and Public Affairs at Brown, coeditor of Policing the Planet, and author of Incarcerating the Crisis: Freedom Struggles and the Rise of the Neoliberal State.

Christina Heatherton is Assistant Professor of American Studies at Trinity College, coeditor of Policing the Planet, and author of the forthcoming book, The Color Line and the Class Struggle: The Mexican Revolution, Internationalism, and the American Century.