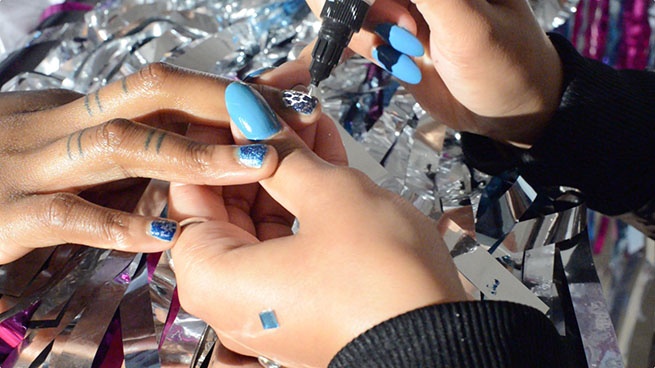 Artist Evan Ifekoya is in conversation with sound artist and DJ Ain Bailey on the occasion of group exhibition Wandering/WILDING: Blackness on the Internet (IMT Gallery, 4 Nov – 11 Dec 2016, curated by Legacy Russell). Evan Ifekoya's current work investigates the possibility of an erotic and poetic occupation using film, performative writing and sound, focused on co-authored, intimate forms of knowledge production and the radical potential of spectacle. Ifekoya is currently developing a radio play, This Catalogue of Poses, initially written during a residency at Wysing Arts Centre. Ain Bailey is a sound artist and DJ whose compositions are inspired by ideas and reflections on silence and absence, architectural urban spaces and feminist activism.

Ain Bailey is currently a doctoral candidate at Birkbeck, University of London, where she recently completed a Leverhulme funded Artist-in-Residence on the AGORA project in the Department of Geography, Environment and Development Studies. Her doctoral research foregrounds the place of sonic practice in the generation of communitas for diverse ‘congregations’ in a number of ethnically and linguistically super-diverse and queer public spaces. Works include the soundtrack for the film Oh Adelaide!, a collaboration with the artist Sonia Boyce.