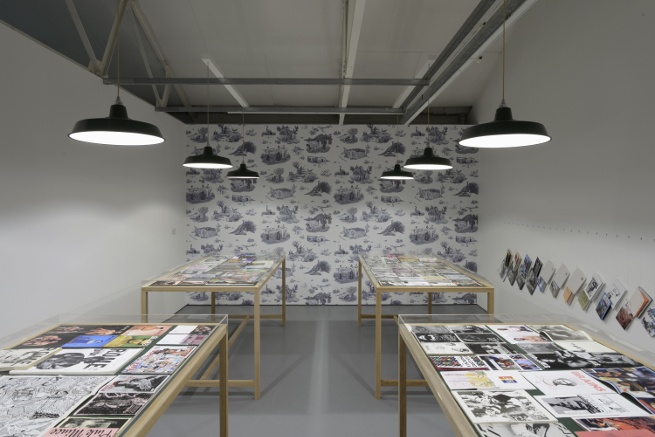 Artist AA Bronson and collector Philip Aarons discuss Queer Zines, currently on show in London as part of AA Bronson: HEXENMEISTER at Maureen Paley (until 31 May 2015). Their exhibition-within-an-exhibition collects the variegated practices of zine-makers past and present, from Britain, North America, Japan, Australia, and Europe, drawing together over 100 queer publications from the mid-seventies to today. An earlier version premiered at the NY Art Book Fair in 2008. Queer Zines has since been exhibited at Witte de With, Rotterdam; at the 10th Gwangju Biennale, South Korea; and at Printed Matter's LA Art Book Fair. A two-volume expanded catalogue was published by Printed Matter Inc. in 2013.

Philip Aarons is passionate collector of artist publications and currently serves on the boards of a number of alternative arts organizations including Printed Matter, MoMA PS 1 and Creative Time. He and his wife, Shelley Fox Aarons, are also avid collectors of contemporary art and support artist exhibitions and publications around the world. They work and live in New York.

In 1969 AA Bronson formed the artists’ group General Idea with Felix Partz and Jorge Zontal. Since his partners died in 1994, AA has worked and exhibited as a solo artist, often collaborating with younger generations. Since 1999 he has worked as a healer, an identity that he has also incorporated into his artwork. From 2004 to 2010 he was the Director of Printed Matter, Inc. in New York City, founding the annual NY Art Book Fair in 2005. In 2009 he founded the Institute for Art, Religion, and Social Justice at Union Theological Seminary in New York City. In 2013 he was the founding Director of Printed Matter’s LA Art Book Fair. He has taught extensively, including at UCLA. He has had exhibitions at the Vienna Secession, Vienna; the Power Plant, Toronto; the Museum of Contemporary Art, Chicago; and Witte de With Centre for Contemporary Art, Rotterdam; amongst other venues. He currently lives and works in Berlin.