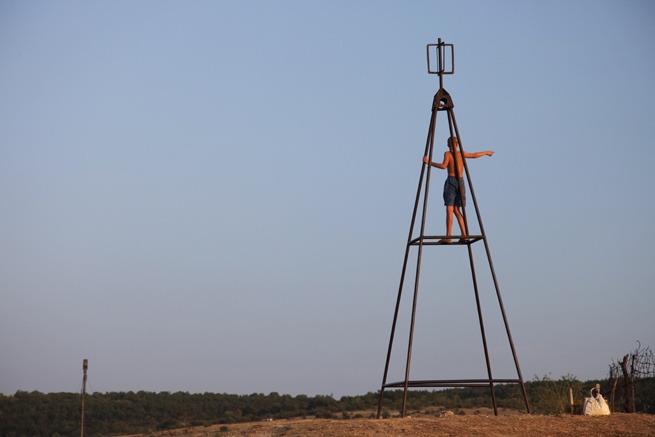 The ICA and LUX present Ruth Maclennan’s recent film Theodosia, shot in Crimea in 2012. The screening of the film will be followed by a discussion between the artist, Neal Ascherson, author of Black Sea, and artist Margarita Gluzberg. This event aims to bring Crimea into focus through the lens of artists and writers it has inspired. and to open up a conversation about the real and symbolic Crimeas, which we see being fought over.

A pilot crashes in the steppes of Crimea in 1944. Tartar tribesmen rescue and care for him. The artist Joseph Beuys ascribes this event to himself, founding a myth of rebirth that he revisits throughout his life and work through the materials he uses and the persona he inhabits. Two months later another event took place, known in the Crimean Tartar languages as Sürgünlik, the exile: the entire Crimean Tartar population was deported to Uzbekistan, and other far-flung regions of the Soviet Union.  At the same time, all Tartar villages were renamed and many were erased from the map and the land. Two thousand years earlier, in the poem cycle, Tristia, the Roman poet Ovid bemoans his exile on the Black Sea in the first century AD. He writes of his fears, sense of dislocation, his barbarian neighbours, and his despair at ever returning home.

For the Russian poets Tsvetaeva and Mandelstam, the Black Sea and Crimea are fascinating and exotic, worlds away from Moscow, an idyllic, pre-lapsarian, pre-revolutionary time and place they return to in their poetry. So begins a century of Crimea as holiday destination. The Soviet Union saw the peninsula transformed into a summer camp for rewarded workers and spoiled apparatchiks. Tens of thousands of children descended to stay in purpose-built sanatoria, and converted Karaite mansions, to enjoy two weeks of sun, sea and indoctrination through sport and leisure. Two decades of dysfunctional capitalism and kleptocratic rule are the latest arabesques written across this palimpsest. Crimea is clearly still sought after as a site to enact myths and desires.