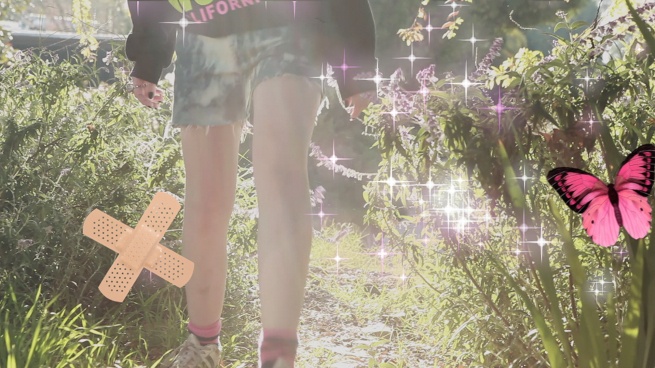 Cinemania: The Years without Light

At the back of the classroom their heads thrash about to the rhythm. You sit on the periphery of their circle, a voyeur, as a tape deck screeches out The Years Without Light by GWAR. A new orbit is formed by you; outside the outsiders. With every whip of hair there is a prophetic sinking feeling. When the days are years, the light feels far off, barely warming the skin.

­This programme considers the choppiness of teenage years through the lens of the outcast, misfit, queer: the individuals in high school that many suspected were in a cult. The witchy, uncanny coven allocated space through a process of exclusion, outside the accepted social hierarchies. An outer ring; both antagonized and feared.

Part confessional, part sermon, part essay on queer occult practice written in reverse, Rachel McRae’s When I was 14 (working thru working thru) is read aloud from its online source, as if it’s a found blog entry that escaped deletion. The text details the trials of being feared and socially constructed as a teenage witch and the power of rumors to both shield and condemn in a hostile small town environment.

Shot in 1996 during his senior year in high school and edited in 2000, Michael Lucid’s Dirty Girls offers a glimpse of the social strata that a group of 8th grade riot grrrls polarises. Harsh criticisms of modes of dress and hygiene are paired with debunking statements from the members of the attacked group. With few on-screen supporters, their zine is rebuked as ‘dime store feminism’ and their age and maturity questioned. As an implicit response a page within the contested zine defiantly reads: "I have a right to be mad, I have a right to be sad, I have a right to be disgusted. You don’t have the right to tell me to shut-up, so don’t even try."

Lush dream logic unfurls in Margaret Haines’ Coco. Temporalities flow in and out of each other: waves advancing, curling under and receding on the sand in the California sun. Adult Coco narrates herself as multi-aged and gendered, conjuring her traumas within planes of tumblr girlhood and high school show and tell. Emojis emerge as punctuation, sparkles rippling out, band-aids and butterflies hover. She wanted to be queen, her paper crown and lettered necklace a proclamation. She would perform the preemptive strike; defy abandonment. But this is only a deferral. In spite of it all, "draw a wild horse, the wild horse is free."