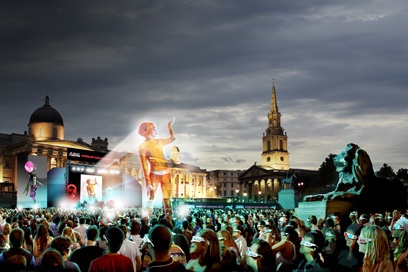 On Sunday 9 September, the multimedia pod will become a high-tech stage to host a landmark Beck's Fusions event: The Chemical Brothers are working together with Flat Nose George and United Visual Artists to create a spectacular one-off show for 9,000 people.

60 pairs of tickets can still be won from Thursday 6 September by visiting the Beck's Fusions Gallery in Trafalgar Square.

The Chemical Brothers' new album We Are the Night has been hailed as a their best yet, and their recent live dates across Europe have shown Tom and Ed at the peak of a 13-year career that has seen them work with Tim Burgess, Beth Orton, Noel Gallagher, Kele Okereke, Klaxons, Midlake and more, collecting rock and dance into a noisy world of hedonism.

Flat Nose George aka Adam Smith has made seminal live visuals and promos for Jamie T, The Chemical Brothers and The Streets, and his latest work is his strongest yet. He's also the man who created the Chemical robots (our cover stars) and he has just started work on his first feature with Warp Films (who are also involved with Beck's Fusions at the ICA, see over). The Trafalgar Square show will see the premiere of Flat Nose George's new piece for The Chemical Brothers.

United Visual Artists have been commissioned to create an exclusive visual finale for The Chemical Brothers' Trafalgar Square set that will go beyond the parameters of the stage and immerse the entire square. A collective that combines art direction, production and software engineering, UVA have recently worked with Massive Attack, Schneider TM, Battles and Arctic Monkeys, and have exhibited at Tate Modern and the V&A.

Further fusions will be created by Calvin Harris, the Scots singer who invaded our brains this summer with Acceptable in the 80s, and Novak 3D Disco, five new-media artists who make bang-up-to-retro 3D visuals and have caused oohs and ahhs at The Big Chill and Electric Picnic. Erol Alkan - the genre-mashing genius who founded Trash - will also be playing. Could it get any better than this?