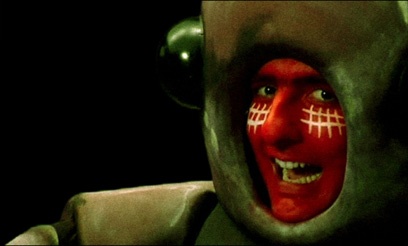 Thursday 6 September is an evening of original fusions commissioned by the ICA. Live performances which aim to illustrate the realms of possibility conjured by the integration of music and art. We are lucky to have some of the finest young animators around working alongside key musicians, all of whom are making strides in the contemporary music landscape on their own terms.

Matthew Herbert, master of the found sound and exponent of the more popular side of dance music's avant-garde teams up with promo film-maker Joji Koyama  (Woof Wan Bau), director of award-winning promos for Mogwai, Coldcut and Duke Spirit; and several short films including Watermelon Love. Matthew Herbert has thrilled audiences around the world with his off-the-cuff musical style and subversive stance. Anyone who is familiar with his work sampling recipes conjured by Nigella Lawson for the LP Plat Du Jour will know what might be in store.

Next up Alexis Taylor from London and Brian Degraw from New York. Alexis is a musician, songwriter and singer, best known as a member of the pop group, Hot Chip - a band few of us can claim not to be familiar with following their critically acclaimed album The Warning storming the charts. Recently working on a number of side projects most notably with Green Gartside of Scritti Politti, at the ICA we will witness his first first foray into audio-visual experimentation with musician and artist Brian Degraw, founding member of the experimental music group Gang Gang Dance. Brian has exhibited artwork throughout the world and toured extensively with GGD and has also collaborated in the recent past with artists Oliver Payne and Nick Relph, and filmmaker Harmony Korine. We can thus assume that these two guys, no strangers to working in partnerships with others will get nothing short of magical when they work together. Check Brian's Retina Riddim DVD for a hint of this fusions' potential.

Also on the bill is animator and film-maker Max Hattler, a further talent on display at this intriguing evening. Although relatively new to the commercial scene, his personal work is a revelation and Max has promised to pull out all the stops to rise to the occasion at the ICA. His already inspiring work with the band Economy Wolf (he has directed two promos for the band) will come to fruition as both parties perform together live.

Lastly Simon Robson, most known for his work What Barry Says, will be doing something that ties it all together. Watch this space... or better still come down and see for yourself.