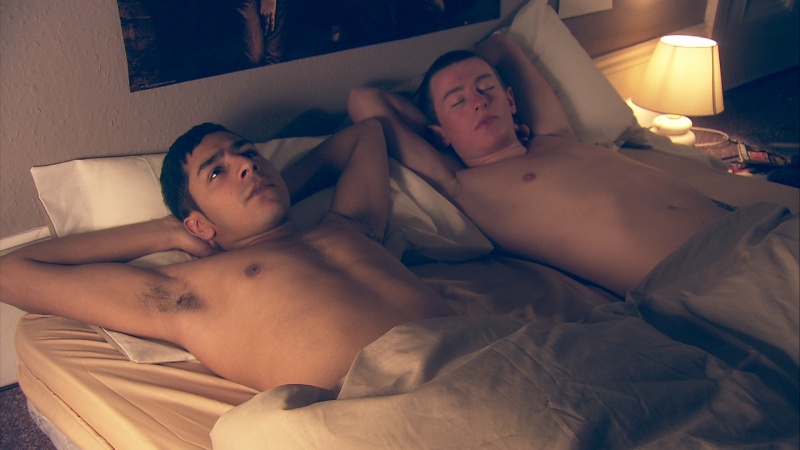 Candy Boy
Dir Pascal-Alex Vincent (France) 13 mins
Panic in the orphanage! The children are mysteriously falling ill and Candy Boy, the most valiant of the orphans, investigates. But the arrival of a new boarder complicates our hero's inquiries.

Protect Me From What I Want
Dir Dominic Leclerc (UK) 14 mins
Daz (Elliott Tittensor) is looking for love. Saleem is looking for sex. Cruising at an underground archway, these two worlds collide. Back at Daz' bedsit, Saleem embarks on a dangerous, thrilling sexual adventure. Both characters disparate worlds overlap and collide to tell a tale of loneliness and longing in a city late at night.

Dish :)
Dir Brian Krinsky (USA) 15 mins
Emo kids Israel and Louie walk around their East Los Angeles neighborhood dishing and "sexting" about their high school classmates. After listening to Louie boast about his sexual escapades, Israel decides he has some catching up to do. Breath - Dir. Margien Rogaar (Netherlands) 8mins On a trip to the lake, 12yo Erik feels deeply attracted to the father of his friend Sophie, and hatches a plan to express the extent of his love.

Lucky Blue
Dir Håkon Liu (Sweden) 28 mins
A balmy summer night. A camping site somewhere in Sweden. The grand emotions, the shy teenager, the first love, caravans, karaoke and a bird. This is the story of a boy who, in spite of his insecurities and fears, finally finds the courage to express his love in his own special way.

My Name Is Love
Dir David Färdmar (Sweden) 20 mins
Love and Sebastian meet each other by a coincidence on a hot Swedish summer night. They happen to share the same secret, but their encounter is going to cause severe consequences for both of them.