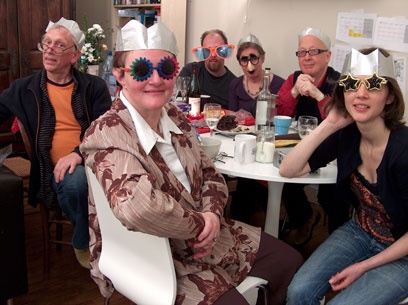 A collection of enthralling documentaries from UK women this year.

Sons and Soldiers, a series of four 3min films, captures poignant moments from the real lives of those caught up in the life-and-death dramas of modern soldiering. The pieces span the length and breadth of military experience, covering the night before enlisting, the passing out parade, memories of front-line fighting, and a mother's grief.

In Specky, the short-sighted Pilley spends four weeks without her glasses in an attempt to train her eyes to see, an experiment with both interesting and humorous consequences.

Ginsborg follows the life of a large construction site, exploring the psychological connection between the city's infrastructure and its inhabitants and the individual's complex relationship to the world of work. As the new buildings materialize we witness the story of an architect who is struck by a disabling loss of balance and the bizarre cure he develops to overcome his condition. The film hovers between documentary and fiction leaving the viewer unsure as to where reality lies.

What happens to a letter when it is addressed with just a first name or no address at all? "We leave no stone unturned" is the motto of the 300 'detectives' at the National Return Letter Centre who find homes for lost mail.