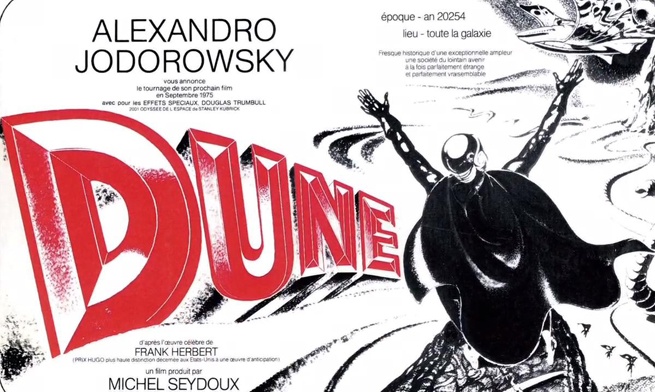 In the mid-1970s, fresh from the critical and artistic triumphs of The Holy Mountain and El Topo, Chilean maverick Alejandro Jodorowsky set his sights on an adaptation of Frank Herbert’s fantasy opus Dune. However, following months of extensive writing, storyboarding, location hunting and casting, the project dramatically fell through – apparently leaving Jodorowsky’s ambitions to alter the landscape of science fiction cinema unfulfilled.

With the help of a range of interviewees (which include HR Giger, Nicolas Winding Refn and, of course, Jodorowsky himself), first-time filmmaker Frank Pavich documents this legendary piece of Hollywood folklore with dynamic creativity. Using original pre-production illustrations to create animated interpretations of Jodorowsky’s vision, the resulting film is every bit as bold as its eccentric subject deserves. In so inventively telling the outlandish tale of what might just be the greatest movie never made, Pavich has gone and made a mini masterwork all of his own.