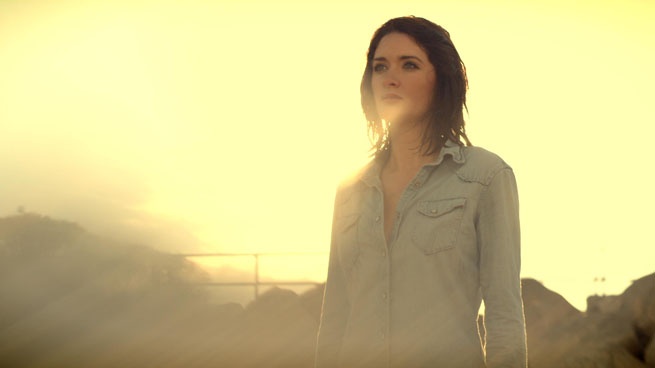 Filmmaker Q&A
There will be a Q&A event with the filmmakers after the 28 February screening, hosted by journalist Kaleem Aftab.

Orbit Ever After
Dir: Jamie Stone | UK | 2013 | 20 mins
Cast: Thomas Brodie-Sangster, Mackenzie Crook, Bronagh Gallagher, Bob Goody
Life in space isn’t easy. And living in orbit, indefinitely, with only your close family for company is even worse. A science fiction romance where two star - crossed lovers overcome all probabilities and sacrifice all they have in order to spend one perfect moment together.

Sleeping With The Fishes
Dir: Yousif Al-Khalifa | UK | 2013 | 9 mins
Sonja lives a lonely life as a fishmonger, more at ease with her fish than her customers, until one day a delivery man turns up who looks like a rainbow trout.

Island Queen
Dir: Ben Mallaby | UK | 2012 | 16 mins
Mim has lived her whole life on a little island with her best mate Danny. Her life is idyllic but going nowhere and she fears she’s left it too late to grow up. She makes the impetuous decision to have a baby – surely a one-way ticket to adulthood? Not in Mim’s case, as she finds herself embroiled in a deeply unpleasant situation that no one could have foreseen.

Sea View
Dir: Jane Linfoot | UK | 2013 | 24 mins
Cast: Eloise Smyth, Ciaran Griffths
Jess and Jason meet at the bus station in a seaside town, seeing each other in daylight for the first time. What at first seemed exciting, forbidden, and divinely careless, soon threatens to be a regretful experience for both. This is not how things were meant to be...

Everything I Can See From Here
Dir: Sam Taylor, Bjorn-Erik Aschim | UK | 2013 | 7 mins
In a desolate part of England a game of football comes to a standstill as the ball mysteriously goes missing. When a lonely stranger returns it the players have to decide whether or not to let him join in their game.

Keeping Up With The Joneses
Dir: Michael Pearce | UK | 2013 | 28 mins
Cast: Maxine Peake, Geoff Bell, Adeel Akhtar
The impeccable wife of an MP confronts the imprisoned reality of her life after being taken hostage by two of her husband’s ‘business associates’.

I Am Tom Moody
Dir: Ainslie Henderson | UK | 2012 | 7 mins
Cast: Mackenzie Crook
A surreal trip through the subconscious of a stifled musician as he struggles to sing. I Am Tom Moody is a film about the creative struggle, it is about self-doubt, and striving to overcome our past.

Room 8
Dir: James W. Griffiths | UK / Poland | 2013 | 7 mins
A prisoner makes a fantastical discovery when thrown into a cell with a terse and unsettling inmate; but in an audacious endeavour to escape his captors, he unearths a malevolent trick and the secrets of the cell are fully revealed.