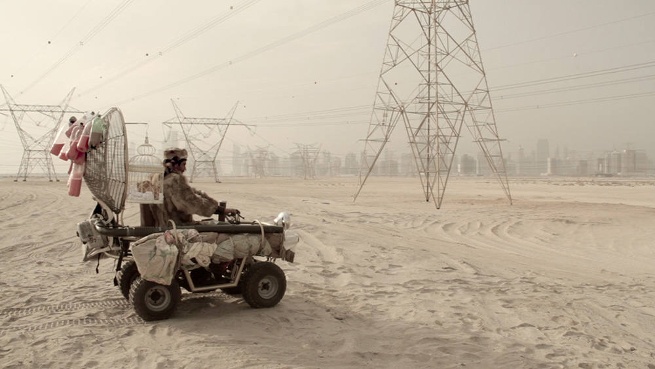 This is the second in a series of events featuring artist filmmakers in discussion with academics, writers, and cultural commentators about the approaches and methods they use to explore temporality, disasters and the politics of futurity. The series was conceived by curator Yasmina Reggad in collaboration with Dr Rebecca Coleman and Dr Michael Guggenheim, Sociology Department, Goldsmiths, University of London.

The series also includes a workshop and performative dinner at Delfina Foundation, a Methods Clinic at Goldsmiths University, London and a one-day workshop and seminar at Tate Modern.

Deniz Üster holds an MFA from The Glasgow School of Art. She collaborates with the language of epics and storytelling in order to re-write institutional histories by imagining or re-situating events on another timeline and in an alternate history. Kinetics and an aesthetic that is at once Victorian and sci-fi permeate her sculptures, installations and films.

She narrates myths from an unknown future, vaguely invoking familiar rituals from Anatolian folklore intertwined with Middle Asian Shamanism and Islamic mythology. She then remoulds these in post-industrial landscapes where epochs interfere with alternative fictitious happenings, or where a bygone formation continues up to the present day.

Beyond is Before tells the history of a sole survivor in a post-apocalyptic future. Inspired by the nomadic history of the UAE and its Bedouin oral culture, the film is set at a time when Islamic worship has merged with the industrial iconography of the 21st century, and when water and petrol no longer exist.

Üster lives and works in Glasgow, Scotland where she holds a studio at Glasgow Sculpture Studios. She undertook residencies with the Delfina Foundation in Dubai, at Seoul Art Space Geumcheon and more recently at the Sirius Art Centre in Ireland. Her work has been exhibited widely including the Saatchi Gallery, UK; Elgiz Contemporary Art Museum and Depo, Turkey;  Seoul Art Space Geumcheon, South Korea, Art Dubai Projects and Maraya Art Centre Sharjah, UAE; Künstlerhaus Bethanian, Germany, among others. She is currently taking part in the group show Reunion at the Sabanci Museum in Istanbul, Turkey.

Matthew De Abaitua is a writer based in London. His debut novel The Red Men was shortlisted for the Arthur C Clarke Award. It was adapted as a short film Dr Easy by Shynola for Film4 and Warp Films. His next novel IF THEN (Angry Robot, September 2015) brings the First World War to a near-future English town governed by algorithm. He lectures in creative writing and science fiction at Brunel University and the University of Essex.

Dr Nerea Calvillo is an architect, lecturer, researcher and curator. She is currently Design Critic in Architecture (GSD, Harvard University, Cambridge USA), curator of the Connecting Cities Network European project on media facades (Medialab Prado, Madrid) and a researcher at the Citizen Sense project (Goldsmiths University, London). Her interests are at the intersection between architecture, science and technology and feminist studies, new materialisms and urban political ecologies.

Her research has been published internationally and exhibited at Kitchen Budapest in Hungary, the Museum of Contemporary Art of Santiago de Chile, and the Canadian Centre of Architecture, among others.

Michael Guggenheim is Senior Lecturer in Sociology at Goldsmiths University, London. His work centres on the relationship between experts and lay people, the role of objects for this relationship, and on methodical and theoretical innovation derived from the combination of science studies with sociological theory. He also engages in art projects that link science and technology studies, ethnography and art mostly in collaboration with Bernd Kräftner and Judith Kröll of Shared Inc.