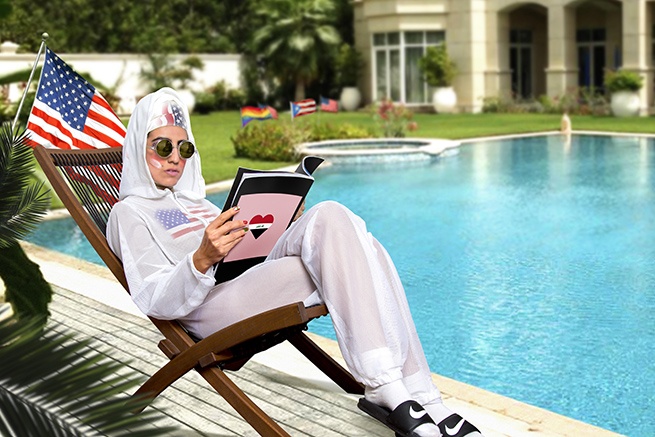 I Heard You Laughing is an ongoing project conceived by curators and writers Myriam Ben Salah and Martha Kirszenbaum. This screening features selected music videos from iconic Middle Eastern musicians of the 1950s, 60s and 70s alongside video works by contemporary artists that reflect the complexities of this often oversimplified 'East-West' configuration.

Following the screening, a panel discussion with Kirszenbaum and Ben Salah, artist and filmmaker Sophia Al Maria and musician and producer Jana Saleh explores the themes and ideas raised by the programme.

In describing the motivation for I Heard You Laughing, Ben Salah and Kirszenbaum state:

Artists from the Middle East are often associated with narratives of struggle and rhetoric of the past. Some end up making works that are almost a response to a Western 'tacit commission'—a term coined by Moroccan scholar Mohamed Rachdi—arbitrarily linking authenticity with traumatic storytelling.

I Heard You Laughing borrows its title from 14th century Persian poet Hafez's book I Heard God Laughing, in which he lauded the joys of love, humour and irony, three clogged pillars of Middle Eastern culture that are making a controversial comeback in the works of a younger generation of artists from the region. I Heard You Laughing reflects on the importance of popular culture, the omnipresence of technologies and the role of music and dance, while tackling a form of vernacular 'disorientalism' and conveying a certain digital cosmopolitanism.

I Heard You Laughing: Live begins at 8pm with music and performances by Lafawndah, Blu Fiefer and Jana Saleh (DJ set)