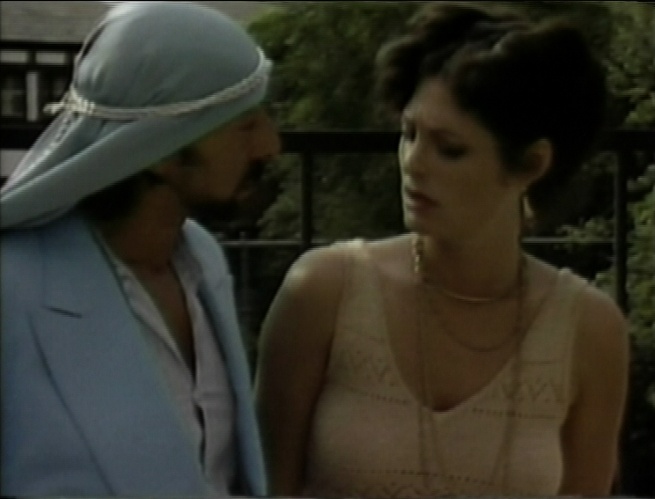 David Lamelas adopts the persona of Colonel Riccardo Garcia Perez, 'dictator, poet, revolutionary' and overthrown president of the fictional Latin American island of St Ana. Here he answers probing questions from Barbara Lopez (Hildegarde Duane) for the television news programme Newsmakers. These concern his treatment of 'subversives' on St Ana, his plans to return to the island and the mysterious circumstances surrounding the 'tragic accidents' leading to the deaths of his three wives. Produced by Long Beach Museum of Art. Long Beach.

David Lamelas plays 'the sheik' in an interview with interviewer Barbara Rothschild (Hildegarde Duane) at his luxurious house in Beverley Hills, LA. The video humorously explores American perceptions of Arab culture through Lamelas' portrayal of an archetypal wealthy Middle Eastern Sheik, questioned by an initially hostile (Jewish) interviewer, who eventually falls for his charm. The title Scheherazade refers not to his favourite wife, as Barbara Rothschild first believes, but to the camel who saved his life in the desert. The film ends with a romantic finale in the Sheik's swimming pool.

Five years after Barbara Lopez's first interview with Colonel Riccardo Garcia Perez, the exiled president of St Ana, they meet again to record a further interview and he tells her of his plans to return to St Ana. The Dictator has now settled in California, where he has opened a successful chain of gyms and enjoys a high-octane lifestyle of yachts and penthouses. He wants to use his money to stage a counter-revolutionary coup in St Ana and shows Barbara Lopez a number of magazines advertising war planes, and even nuclear weapons, that he intends to buy to aid his invasion. Through the persona of the Dictator, Lamelas draws attention to contemporary scandals of American collusion in Latin American affairs, such as the Iran/Contra affair, particularly when Lopez accuses the dictator of taking money from the CIA.

David Lamelas and Hildegarde Duane pose as two homeless people of Latin American origin - perhaps the exiled president of St Ana and his wife? Standing next to their shopping trolley in a derelict part of downtown LA, they talk about their colourful lives, and their fall from power to poverty.