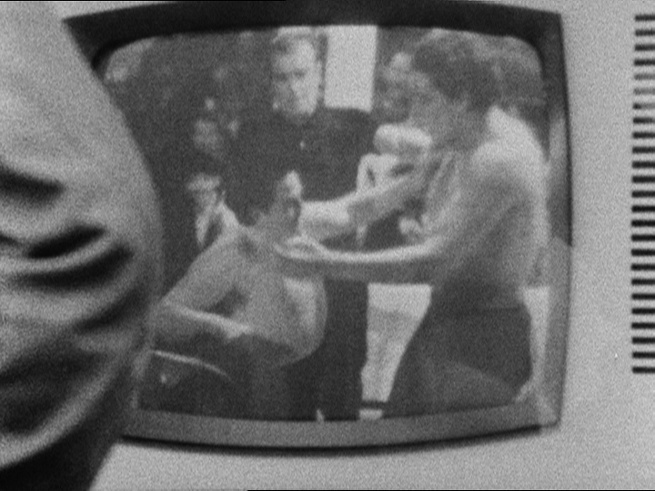 The second screening of work by David Lamelas.

People count out a period of time in different areas of Paris.

David Lamelas' first film, A Study of Relationships between Inner and Outer Space analyses the architectural, social, climatic, or sociological data that make up the exhibition's spatial environment, that of the institution and its geographical location. Beginning with the empty exhibition hall, the description is neutral and analytical. It progresses in ever larger circles, placing emphasis on all the important functional elements, from the electronic devices in the exhibition space, to the city's traffic regulation to the communication and information media and finally, to the climatic conditions of the London environment. The film concludes with six interviews regarding the big news item of the day: the future "landing" of the first men on the moon.

The first part of Reading Film from "Knots" by R. D. Laing shows various pages of a text written by English psychoanalyst Ronald D. Laing where he converts real cases of human interaction into abstract and paradoxical verbal models. This way of presenting the same situation as a function of different viewpoints and with different ends, echoes the segmentation that David Lamelas employs in gathering information. Each page remains on screen long enough to allow the viewer to read and comprehend the text. In the second part we see a woman reading the same text.

Many of David Lamelas's works are exercises designed to test how meaning is constructed in film: "I wanted to find symbols for 'container' and 'contents'—to represent how the camera frames—and what is shown on screen....I decided to use a glass and milk. The eight sequences end with...the glass being shattered and the milk splattering all over the table, which implies that there is no way to contain information".

The film Reading of an Extract from "Labyrinths" by J. L. Borges shows a young woman reading an essay by Argentinean writer Jorge Luis Borges titled Nueva refutacion del tiempo (New Refutation of Time) out loud. Her lips can be seen moving but her voice cannot be heard. The phrases pronounced are actually shown in subtitles, but the length of the presentation is too short to permit them to be read and comprehended. This displacement and the disorder it generates reveal different levels of information de-codification in the work. This unfolding makes the limits of our perception manifest, and in this way enters into resonance with the rejection that Borges expresses for simultaneousness and succession, in other words, for the concatenation of deeds.