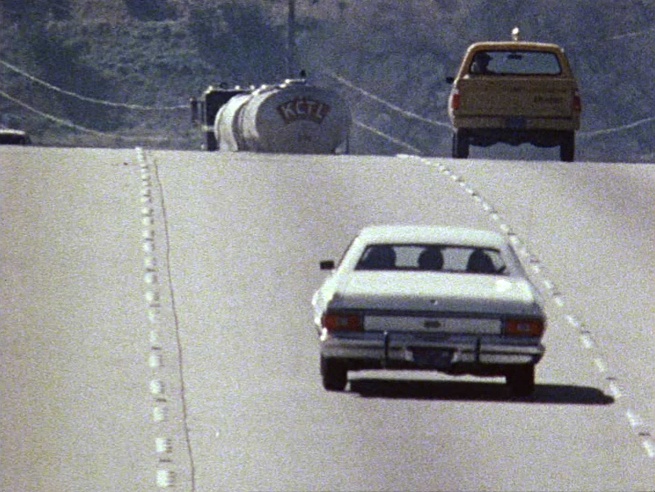 A screening of work by David Lamelas, followed by a Q&A with the artist.

David Lamelas describes The Desert People as "a study on American film production". The Desert People begins like a classic road-movie. The setting is completely familiar to us: a car crossing the desert with a group of people traveling on board. But as soon as the narration begins, it is interrupted by documentary-style interviews. Passing in this way from one film genre to another, Lamelas manages to blur the boundary between fact and fiction.

The five passengers describe their experience on a North American native Indian reservation. Each member of the group has his or her own perspective on the Papago tribe. One offers an anthropological analysis while another discusses writing a feature article for a women's magazine. They each present their version of the 'truth' about how the Papago live. Whilst they examine the tribe's social behaviour, there is little self-reflection on their own group dynamic. Ironically, numerous cuts to their car journey reveal a complete lack of interaction between the travellers.

The final interviewee, Manny, a Papago Indian, comments on the way the American influence on Native Americans is leading to the loss of his own indigenous culture. His English drifts into Spanish and then Papago, as if the meaning of what he wishes to communicate would be lost in translation. For the English-speaking viewer this shift is confusing and demonstrates the difficulty of knowing another culture from the outside. The film ends unexpectedly with a jump cut back to the feature film scenario.

The first video made by David Lamelas for Canadian television, The Hand proposes a satirical look at news programmes on United States' television. A hybrid transmission with a mix of journalism and an interview with a star, it is presented by newscaster Barbara Lopez, a character inspired by Barbara Walters, the North American reporter who became famous for her interview with Richard Nixon during the Watergate scandal. Barbara Lopez begins her newscast reporting on a series of factual and fictitious news items, and her presentation is followed by an exceptional appearance by pop legend Kevin Gold. Lamelas takes the program to an extreme sense of ridiculousness, interrupting the program with a metaphoric image of censorship: a hand with a black glove, wielding a knife, passes over the control panel, ready to push buttons.

The programme runs for 82 minutes.