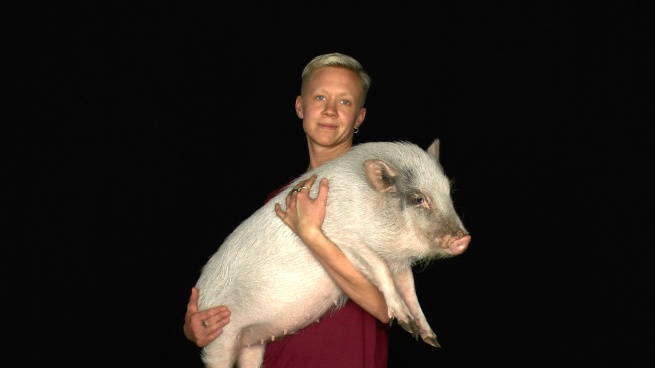 A screening selected by Radclyffe Hall, a concomitant group of artists and writers dedicated to exploring culture, aesthetics and learning through the lens of contemporary feminism.

Radclyffe Hall is a concomitant group of artists and writers dedicated to exploring culture, aesthetics and learning through the lens of contemporary feminism. With no fixed membership or base, Radcylffe was first described in the Fall/Winter of 2015, though it has anonymously participated in a number of public presentations prior to this date, in art institutions in Tallinn, Glasgow, New York, and London. A series of exhibitions and events will take place in Fall 2016 at Newark, Glasgow. Radclyffe Hall has no named individuals except for points of public enunciation (ie. members representing Radclyffe Hall at a screening, or sending an email on behalf of Radclyffe Hall). The activities of Radclyffe Hall also occur under other names and works retroactively.

YOU ARE BORING! discusses the troublesome nature of “looking” and “being looked at” in larger contexts including labour within the Experience Economy, performer/spectator relations, participatory culture, contemporary art display and queer representational politics. YOU ARE BORING! formulates from this web of thoughts a 3D video installation focusing on five performers’ bodies as sites-of-speech removed from any physical context. Through strategies that overload the capacities of affective multitasking and the self-consuming illusion of total subjectivity, the spectator is personally addressed and promised exactly what he or she needs.

Vika Kirchenbauer is a Berlin-based artist and writer. In her work she explores opacity in relation to representation of the ʻotheredʼ through ostensibly contradictory methods such as exaggerated explicitness, oversharing and perversions of participatory culture. Her work has been exhibited in a wide range of contexts in about forty countries. Recent and upcoming exhibitions include solo shows at ALASKA Projects Sydney and Gold + Beton Cologne as well as group shows at Neuer Berliner Kunstverein (n.b.k.), Neue Gesellschaft für Bildende Kunst Berlin (nGbK) and Roundhouse Vancouver.

Peter Burr creates complex digital videos and installations that rely on imaging technology not to enable detail but rather to create a vertiginous space where one's visual perception is suspended between recognition and imagination. In Arcology, an awkwardly rendered landscape houses a rotting civilisation called 'The Mess'. With a narrative written by Twine game designer Porpentine, this is an environment that is largely inhospitable to any forms of humanity, yet still clings to the language of administration and surveillance. Drawing its title from a portmanteau of 'architecture' and 'ecology', and referring to design principles for densely populated spaces, this work calls into question the construction of 'beautiful and evil' habitats that require impossible levels of resources and stamina for survival.

Peter Burr is an artist from Brooklyn, New York, specialising in animation and performance. His work has been presented at venues across the world including Le Centre Pompidou, Paris; Reina Sofia National Museum, Madrid; and MoMA PS1, New York. His recent work explores the concept of an endlessly mutating death labyrinth and is being expanded into a video game through the support of Creative Capital and Sundance. Previously, he worked under the alias Hooliganship and in 2006 founded the video label Cartune Xprez, through which he produced live multimedia exhibitions showcasing artists working in experimental animation.

Satirically drawing its title from the Dutch far right-wing party founded by political Geert Wilders, Oreet Ashery's Party for Freedom mobilises the notion of 'freedom' to consider: free from what, free from whom, and free at what cost. A multipart project consisting of several years of research, performances, slideshows, installations, this work is here distilled into a specially extracted selection, which considers the increasingly phobic natures of Western societies (homo-, islamo-, xeno-, to name but a few). Ashery attempts to expose the commodifying relations between nudity and pornography, desire and authoritarianism, democracy and intervention.