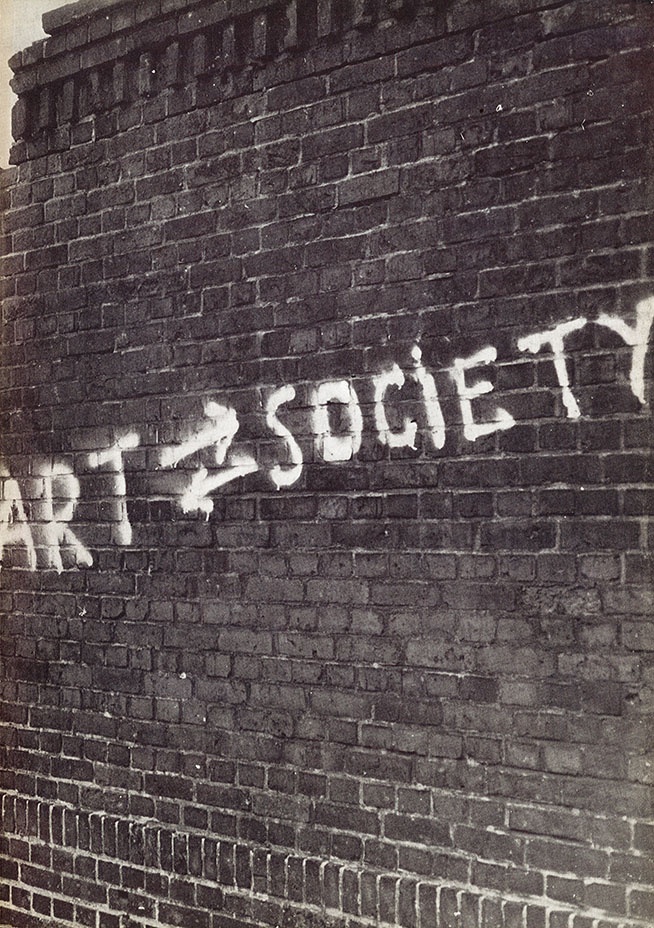 Art into Society – Society into Art

This archival display documents the 1974 ICA exhibition Art into Society – Society into Art: Seven German Artists (29 October – 24 November 1974), a key part of a season called the German Month that was staged at the ICA and which featured film screenings, talks, performances and exhibitions showcasing the wide-ranging cultural developments emerging from West Germany at that time. Organised by ICA Curator Sir Norman Rosenthal and writer and curator Christos M. Joachimides, Art into Society – Society into Art included artists Albrecht D., Joseph Beuys, KP Brehmer, Hans Haacke, Dieter Hacker, Gustav Metzger, Klaus Staeck and photographer Michael Ruetz. At a time of pivotal change within the  broader social and political structures, as well as the field of art production, the exhibition showed the increasingly close relationship between artistic expression and politics coming from West Germany.

From the planning stages to the final display, the exhibition drew on the notion of an ‘active’ process. Both curators and artists alike sought to move away from an individualistic approach to art and exhibition-making, and towards a more democratic system. A key example of this process was the staging of a colloquium, or seminar, on 26-27 April 1974 in Dieter Hacker’s studio in Berlin involving the curators and artists. Its aim was to open a discussion with all parties involved as a way to create a more egalitarian process between artists and curators. The works presented in the exhibition all engaged with political critique and yet ranged greatly in form. Whilst KP Brehmer presented his seminal series of wall panels Realkapital–Produktion, Gustav Metzger chose to remove himself from the exhibition completely as a protest against the art world. Joseph Beuys however remained present in the gallery for the majority of the exhibition and engaged in conversations with the audience sketching out his ideas onto numerous chalkboards subsequently strewn across the floor – a work now known as Richtkräfte (Directive Forces).